Home • News • A quality VR headset for pros, but not without shortcomings

A quality VR headset for pros, but not without shortcomings

The Vive Focus 3 is HTC’s answer to the Oculus Quest 2. This all-in-one headset dedicated to professional uses is largely inspired by its competitor, but seeks to do better to establish itself as a premium alternative. What is it really about?

HTC has sent us a copy of the Vive Focus 3 that we have been able to test extensively. When we put on the headset, we immediately understand that the Taiwanese manufacturer has focused on two points in particular: comfort and display quality.

Outstanding display quality
Let’s start with the screen. With a resolution of 2448 x 2448 pixels per eye (on LCD panel) combined with new lenses, the Focus 3 offers unprecedented sharpness until then. The “mosquito net” effect peculiar to the first generations of headsets like the original HTC Vive has completely disappeared. This resolution is served at a rate of 90 Hz and with a diagonal field of view of about 120 °. It is wider horizontally, but a little reduced vertically.

The result is a visual experience unlike any other on the market. It should also be noted that the adjustment of the IPD is always done using a slide knob, as opposed to the (less precise) three-point adjustment of the Quest 2.

Very comfortable… if we can get it right
The other striking element is the design. The Vive Focus 3 is made of a magnesium alloy that HTC describes as 20% lighter and 500% stronger than the composite materials traditionally used for these devices. In fact, it weighs 785 grams, which is significantly more than the Oculus Quest 2 (503 g). But the battery, located on the back, serves as a counterweight and makes the headset very comfortable to wear.

The only downside: the headband that serves as an attachment system is rigidly attached to the rear block and the front part, which means that it is not possible to tilt the front of the device as you would like for maximum comfort. It was not annoying in our case and the experience was pleasant, but different morphologies could be less comfortable. Since the area of the lenses providing the maximum sharpness (so-called “sweet spot”) is relatively small, it is also important that the headset is well centered to take advantage of its display quality.

Very noisy and with too weak sound
The computing capabilities are provided by Qualcomm’s Snapdragon XR2, which also equips the Oculus Quest 2. This System-on-a-Chip specially optimized for virtual and augmented reality is the industry benchmark at the moment, with a computing power twice that of the Snapdragon 835 that equipped the Vive Focus premier of the name. It is accompanied by 8 GB of RAM and 128 GB of internal storage. A microSD port located on the inner side of the headset (and therefore inconvenient to access) makes it possible to increase storage up to 2 TB.

Now let’s touch on a very important black spot: the Focus 3 uses an active cooling system (with a small fan) to get the maximum performance out of the Snapdragon XR2. The problem is that the latter is very noisy, and the sound power of the headphone speakers is very low at the same time. The result is that it is often difficult to hear the sound of an experiment, even in a completely silent environment. If there is surrounding noise, listening to instructions quickly becomes very difficult or even impossible.

The Vive Focus 3, however, has a 3.5 mm jack port for connecting external headphones, which alleviates the problem a little. It also has two USB 3.2 Gen 1 type C ports and supports Bluetooth 5.2. Nevertheless, if we take into account the uses highlighted for the device (professional training, design review …), the default use will be in the majority of cases without an audio device in order to be able to dialogue with colleagues. Under these conditions, poor sound quality and fan interference are a significant problem. 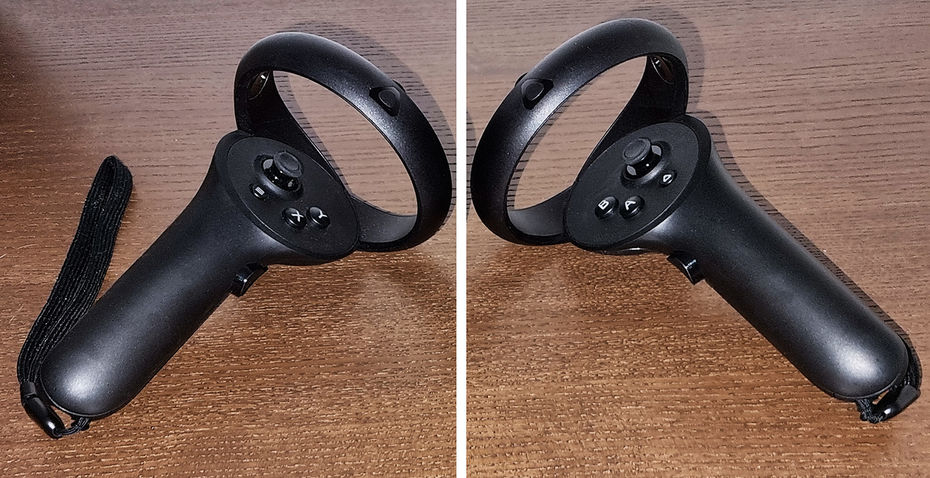 Redesigned controllers in Oculus fashion
HTC has made a lot of progress on the side of controllers, which now use optical tracking and more by ultrasound (as on the Focus Plus). The Focus 3 has four front-facing cameras placed similarly to the Quest 2, and its new controllers are also very clearly inspired by those of Oculus. The latter have established themselves as the reference and have also been copied by HP (Reverb G2) and Sony (PlayStation VR). The layout of the buttons is almost identical, but the ergonomics, however, remains inferior to what the Quest 2 offers.

The tracking performance is quite decent, even if it does not reach the level of Quest 2. For the type of experiments that Focus 3 is intended for (i.e. that do not require very fast movements), this is not a topic. The controllers have an autonomy of about 15 hours between each charge according to HTC, which we have confirmed with a varied use. Sustained use will reduce this autonomy. The controllers are equipped with a Lithium-ion battery and are recharged via a double USB type-C cable. Note, however, that no charger is supplied with it and therefore it must be purchased separately. 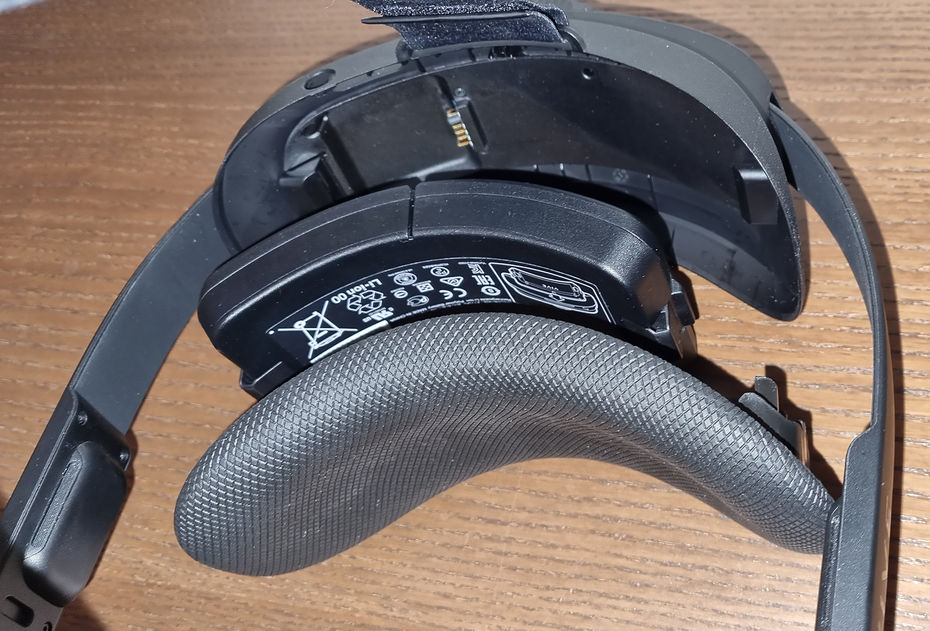 A removable battery for intensive use
The headset itself is recharged using a dedicated port. The reason is that it has a removable battery, which allows continuous use as long as spare batteries are available. The manipulation takes only a few moments and each battery even has a charge indicator. Moreover, the batteries can be charged by half (0% to 50%) in just 30 minutes.

Very practical for intensive use such as found in training centers, festivals and other exhibitions, or entertainment centers. At the same time, foams in contact with the face and the back of the head are washable and can be easily replaced.

We note that a passthrough function is available, convenient to quickly check what surrounds us, but not really exploitable to do augmented reality. A hand tracking capability is also available as an alternative to controllers. It remains rudimentary but has the merit of existing and it can be conceived that it can be used for some simple applications.

An interface that fulfills its role
On the application side, the Vive Focus 3 is equipped with a revised and corrected home environment. Rather clean, it is once again inspired by what is found on the Oculus Quest 2, and therefore fulfills its role perfectly. A professional application store offers some partner experiences (as well of course as HTC products, such as Vive Sync), but then it will be up to each organization to load the applications that interests it. For the deployment and administration of headset fleets, a management solution (MDM) published by HTC is available and compatible with market leaders.

Note that there are also some small games, but that this is not the market for which the headset is intended and that it is therefore strongly discouraged to buy it for this purpose. It is possible to connect it wirelessly (via Wi-Fi 6) to a PC, but we will rather recommend for this use a dedicated PC headset, such as the Vive Pro 2.

Conclusion
Last but not least: the price. The Vive Focus 3 is sold for 1180 euros excluding taxes (i.e. 1416 euros including VAT) with a two-year warranty. Each additional battery costs 91 euros, while protections will be sold separately for 45 euros. We have to compare this to the price of the Oculus Quest 2: 349 euros. Since the Oculus for Business offer has disappeared in favor of using devices at market prices (possible through App Lab), this gives a significant price difference. Same thing compared to the Pico Neo 3 from the eponymous Chinese start-up.

The Focus 3 has many advantages but is not without flaws and it is therefore necessary to make a wise choice that takes into account budget and deployment constraints, especially since the company’s after-sales service is not always responsive in case of problems. It remains a good choice for professionals who plan intensive use due to its robustness and accessories and are looking for equipment that will allow them to deploy what they want, how they want and when they want. The Focus 3 is also an encouraging progress for HTC, which we can hope that the next headset finally keeps all its promises.