In the Corona year 2020, there was a significant boost for the cloud. Nevertheless, legal uncertainties are holding back the use of the public cloud in companies. […]

In the past year, the use of cloud computing has once again increased significantly. This is a central, though not particularly surprising, finding of Bitkom Research and KPMG. According to the new” Cloud Monitor 2021″, a good eight out of ten companies in Germany now use computing power from the cloud – in the previous year, it was 76 percent, five years ago their share was still 65 percent. Another 15 percent of companies are currently discussing a cloud deployment or have already firmly planned it. Only three percent say that the cloud is still not an issue for them. Five years ago, the share of cloud refusers was 17 percent.

As part of a representative survey commissioned by KPMG, Bitkom Research surveyed 556 companies with 20 or more employees in Germany. “In the corona pandemic, many companies have once again recognized the advantages of cloud applications that enable problem-free work from the home office,” says Lukas Gentemann, Senior Research Consultant at Bitkom Research. “In addition, there is the increased digitization in many companies, which drives the need for scalable IT applications, such as the cloud offers.“

The cloud trend will continue in the coming years. According to the survey, the already active cloud users want to operate on average about half of their applications in the cloud in 2025, with large companies with 2,000 employees or more even three-quarters of all applications. Almost one in three cloud users currently pursues a cloud-first strategy, five percent even rely on a cloud-only approach, with the goal of migrating all systems to the cloud in the long term.

The larger companies, in particular, are pushing ahead with the restructuring: Half are now pursuing a cloud-first strategy, and one in four companies is pursuing a cloud-only strategy. “The future of productive applications in companies lies in the cloud,” stated Peter Heidkamp, Head of Technology Center of Excellence at KPMG. “Large companies are pursuing this transformation process at a significantly higher speed. Innovative medium-sized companies, in particular, should take a very close look here and increase their own pace.“

Cloud computing is no longer just a matter of technology or operating model. The topic is gaining more and more influence on the business model and the economic success of companies. Nine out of ten cloud users see this as an important contribution to the digitization of their company (previous year: 77 percent). Four out of five companies state that the cloud is relevant for the digitization of internal processes (previous year: 69 percent) and around half said that the cloud makes a major contribution to the development of new business models (previous year: 38 percent).

However, Gentemann from Bitkom Research warns against misunderstandings: “The use of cloud computing does not automatically turn a company into a digital company.”However, cloud solutions could drive the digitization process in companies at all levels. “In the companies that use cloud computing, the pandemic has shown that the cloud is a core technology of digitization.“

The public cloud in particular can be a catalyst for many companies to try out new technologies, the results of the survey have shown. For example, three out of ten companies use the Internet of Things (IoT) or Industry 4.0 applications, and a further 36 percent plan to do so. A quarter of respondents want to use AI applications from the public cloud in the future, and one in ten already does so.

However, there are still many reservations about the public cloud. Companies are particularly concerned about unauthorized access to sensitive business data (75 percent) and justify their reluctance with ambiguities regarding the legal situation (67 percent). This uncertainty even seems to be increasing. In the previous year, 60 percent complained about it, two years ago even only 51 percent. Currently, six out of ten companies (60 percent) that do not use a public cloud say that legal and regulatory conditions contradict this. 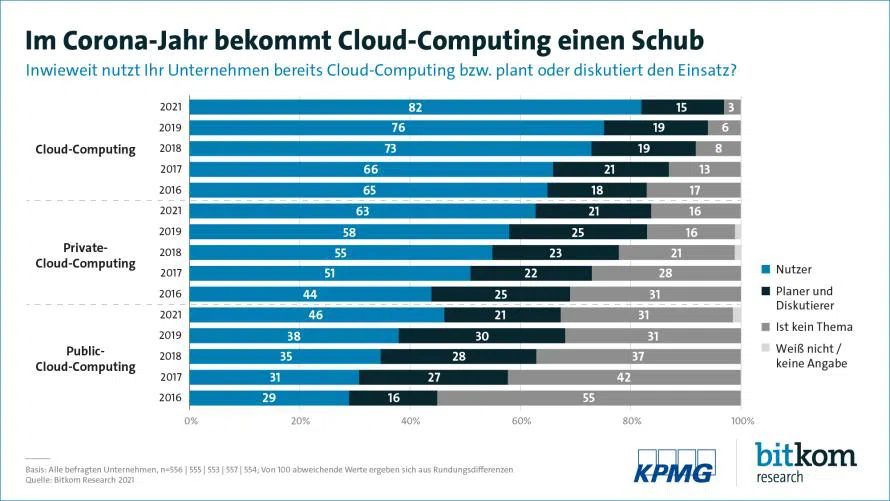 In fact, even those who have already opted for the public cloud are creating legal requirements. More than half say they have difficulty meeting their compliance requirements when integrating public cloud solutions into existing IT infrastructure-only 29 percent said so two years ago. Among companies that use, plan or discuss cloud applications, nearly 60 percent admit that the ruling of the European Court of Justice, which overturned the Privacy Shield Agreement with the US and thus placed a big question mark behind data transfers outside Europe, would affect their cloud strategy.

Even with the management of cloud services, many companies still have problems. According to the survey, around half have found that employees have used public cloud services without company permission within twelve months. Three-quarters of the companies have subsequently offered these employees alternatives, and 14 percent have integrated the unauthorized services into their company offering. But one in four has also blocked access to these public cloud services. Almost a fifth of respondents also say they train employees on shadow IT.

KPMG consultant Heidkamp sees a lot of room for improvement here. “The use of the public cloud requires good planning and a corresponding security concept.”The big cloud providers have an advantage here. These groups employed the best professionals to secure their customers ‘ data and applications. The European Gaia-X initiative is also an opportunity ” to create more trust in cloud applications with uniform standards and legally compliant requirements.“

According to the current Cloud Monitor, the most important criteria when choosing a cloud service provider are the performance and stability of the systems (89 percent) as well as confidence in the security and compliance of the cloud provider (86 percent). Three quarters (75 percent) pay attention to the fact that the data centers are located in the legal area of the EU. The independence or openness of the cloud provider (54 percent), the innovative power of digital tools from the cloud (53 percent), and the interoperability of solutions from different providers (51 percent) follow by a clear margin.