Home • News • DNA as a storage medium: Storage of the future?

DNA as a storage medium: Storage of the future?

Researchers want to use DNA to store digital data for millennia. So far, this has only worked for centuries – and analog, not digital. […]

Who does not know Steven Spielberg’s film Jurassic Park, in which billionaire John Hammond breeds dinosaurs again after millions of years from DNA trapped in amber? The two scientists Robert N. Grass and Wendelin want to use exactly the same principle – DNA enclosed in an artificial fossil – to bring a long-lasting storage solution to the market.

The reason: Increasing digitization leads to an immanent problem: How can the generated digital information be stored in such a way that later generations can still access the content after centuries – similar to a book? As of today, there is simply no long-term solution for digital storage, because microfilms (shelf life about 500 years) are also an analog process. Classic backup media such as tapes even last only about 20 years before they disintegrate or decompose. Hard disks or self – described BluRay discs, on the other hand, should be readable for almost 50 years-always assuming optimal storage.

On the other hand, the DNA data storage of the Austrian-Swiss team will enable Grass und Stark to store information for thousands of years. Under laboratory conditions, the two researchers, who have been nominated as finalists for the European Patent Office’s European Inventor Award 2021 in the “Research” category, have already simulated 2,000 years of storage under the environmental effects of Central Europe.

The idea of the two scientists from ETH Zurich is based on the idea that DNA is not only suitable for storing the genetic information of a living being, but could also be used as a means of storing data. This is done by converting digital data (a series of zeros and ones) into a corresponding sequence of the four DNA base pairs.

However, the matter has a catch: unprotected DNA strands are quickly chemically decomposed when exposed to water, air and heat. Grass and Stark were inspired to solve this problem by fossils in which DNA has been preserved for hundreds of thousands of years. “The challenge was clear: to make DNA stable,” explains Grass. “Fossils turned out to be the right way. Therefore, we studied the chemical structure of glass deposits on DNA, which eventually led us to the encapsulation technology.“

The researchers recreated this protective effect by enclosing synthetic DNA in glass particles up to 10,000 times thinner than a sheet of paper. Using a synthesis technique, the desired data is converted into DNA, which is enclosed in glass particles. These non-porous “glass fossils” protect DNA from most corrosion media and temperature damage. At the same time, it can be easily recovered and read by treating the particles with a fluoride solution that can dissolve glass, but does not damage the information.

That this is not a gray theory, the scientists already showed in 2018.They reissued the album “Mezzanine” of the group Massive Attack in DNA format. To do this, the researchers encoded a 15 MB file in strands of synthetic DNA. Further evidence of the data storage potential of DNA technology followed in 2020, when the first episode of the Netflix series “Biohackers”-a 100 MB video file – was successfully stored on DNA. 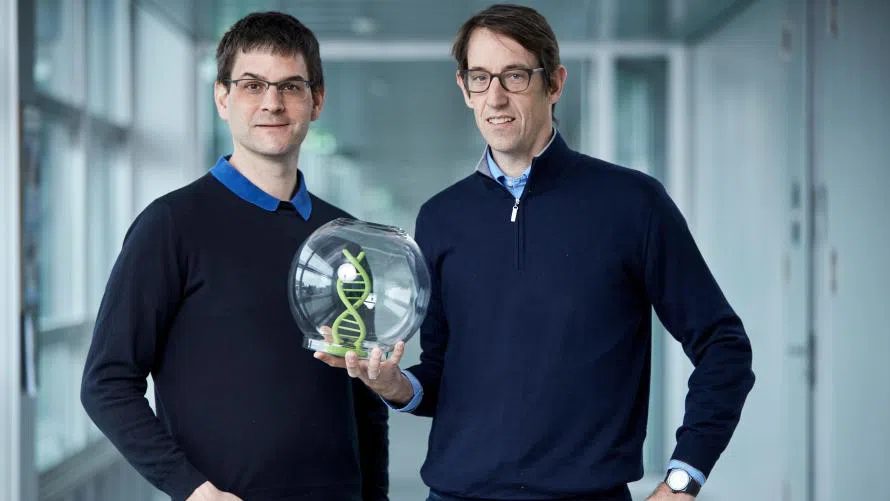 Successes that cannot hide the fact that the practical use of the technology is still severely limited today, since the costs for writing synthetic DNA are still very high. But Grass and Stark are working to lower these by simplifying the equipment for DNA synthesis. However, Grass is confident that the new technology will allow access to megabytes of DNA storage for just a few euros in the next few years, so it would then be suitable for the secure storage of valuable information.

If only small pieces of information are required, nothing stands in the way of commercial use today. in 2016, Grass and Stark founded the ETH spin-off company Haelixa AG. The glass fossils from Haelixa can be used as a barcode for tracking purposes. The tiny DNA-containing particles are applied to a product or substance and later retrieved for verification. According to the researchers, the technique has already been used to track underground water flows and verify products in their supply chains – such as organic cotton or gemstones from conflict-free sources.

* Jürgen Hill is Chief Reporter Future Technologies. The graduate journalist and computer scientist currently deals with current IT trend topics such as AI, quantum computing, digital twins, IoT, digitization, etc.In addition, he has a long-standing background in the field of communications with all its facets (TK, mobile, LAN, WAN).

Get a free quote
PrevPreviousData Visualization at Universities: Seeing the Needle in the Haystack
NextAfter criticism of License Direct, Microsoft revises changesNext