Home • News • Get your old hardware going again with Ubuntu 19.10

Get your old hardware going again with Ubuntu 19.10

When technology editors with many years of experience go into raptures, then the product in question has to be really good. One such seems to be the new Ubuntu Linux 19.10.

Scott Gilbertson from Ars Technica is thrilled. For more than ten years he has been testing every new Ubuntu release, the Linux distribution from Canonical. With the current version 19.10, which was published regularly in October, a completely new concept of performance is revealed to him.

Gilbertson reports that he was testing a brand new Macbook when Ubuntu 19.10 was released. Without much expectation, he installed it on his somewhat aged Lenovo and was blown away from then on. With Ubuntu 19.10, his Lenovo made the Macbook “look like a sloth”, according to Gilbertson. It is of course difficult to judge whether the enthusiasm carries the comparison a little further than would be objectively justified.

Gnome 3.34 is to blame for the performance gain

For this reason alone, Gilbertson recommends that every Ubuntu aficionado switch to version 19.10. The main driver of the better performance is the Gnome version 3.34 used. Canonical developers were particularly involved in this.

Their aim was not to remove any bottlenecks, but to optimize the system when it is idle. This should create a particularly soft usability with flowing processes and animations in the imagination of the outsourcing developers. In Gilbertson’s view, this has succeeded very well.

Javascript has no influence on the performance

As part of the work on the new Gnome, the developers examined the often criticized use of Javascript, which is supposedly responsible for performance weaknesses. However, this assumption could not be confirmed. Rather, it turned out that the Javascript components had practically no negative impact on performance at all.

Revised theme brings a breath of fresh air into the design

In addition to the speed, what about Ubuntu 19.10 is the new look of the revised community theme Yaru. Instead of making a decision for a light or dark theme, the designers combined light and dark elements and built a kind of composite theme that looks very elegant. 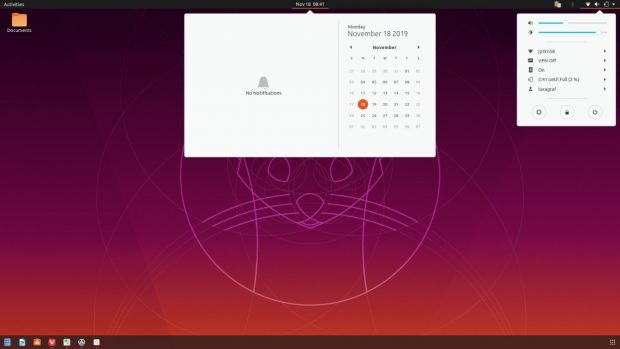 Users of AMD and Nvidia graphics hardware could also be interested in Ubuntu 19.10, because the current version 5.3 of the kernel used supports the Radeon RX 5700 series. Nvidia drivers can be found in the installation file and therefore do not require any additional effort after the Ubuntu installation has been completed.

Who doesn’t still have this completely intact laptop lying in the corner, which with the current Windows 10 just sneaks around? Gilbertson promises that Ubuntu 19.10 will turn it into a racehorse. It’s worth a try. Doesn’t cost anything …