Google on Monday announced changes to Workspace (formerly known as G Suite) and a new service called Spaces. From now on, Google will open its unified workspace experience to anyone with a Gmail account – and add a custom, paid Workspace account. Meanwhile, Spaces is another collaborative environment that will exist alongside the “smart canvas”concept that Google announced last month.

Monday’s announcements are just another step in Google’s journey to organize its Google apps like Docs and Sheets into one cohesive experience. In October last year, Google announced that it would change the name of the Google G Suite to Google Workspace and aim for cross-app collaboration. Google began the process with its paid Google tariffs and postponed the conversion of consumer offers to later. Now is the time.

Today, consumers with a Gmail account can try the new workspace collaboration feature. This allows consumers who open a Google Docs document in Google Chat for Gmail, for example, to share it with others who can then edit it together.

Google is also announcing a special custom workspace account for businesses aimed at gig or contract workers. According to Google, the new account offers ” premium features, including smart booking services, professional video meetings and personalized email marketing, and much more is in the pipeline.”Google doesn’t say much more, but users can sign up for more news about the plan. The Google Workspace Individual subscription will cost $ 9,99/month, with a monthly introductory price of $ 7,99, explained a Google representative via email.

As mentioned earlier, Google Chat and chat in Gmail are two different things-and it turns out that this difference is more significant than you might think. In fact, Google even has to spell it out in a support document.  “You get the same features in Chat and Chat in Gmail, but the built-in Gmail experience provides a central place to communicate with friends, family or colleagues between emails,” says Google.

Currently, Google Chat offers the “Rooms” feature, which allows chat users to conduct chats in small groups. This summer, Google will rename Rooms to Spaces – “a special place for organizing people, topics, and projects in Google Workspace,” according to Google. “Over the summer, we will evolve Rooms into Spaces and introduce an optimized and flexible user interface that helps teams and individuals keep track of everything important.“

You might think that Spaces will be the place where Google will develop and unfold its “smart canvas”concept. Smart Canvas includes what Google calls “smart chips,” or links to users and files that can be referenced and linked to them. But a Google representative said the new Spaces announcement is “separate” from Smart Canvas, leaving open the question of how much the user experience in Spaces will differ from the rest of Google’s vision. 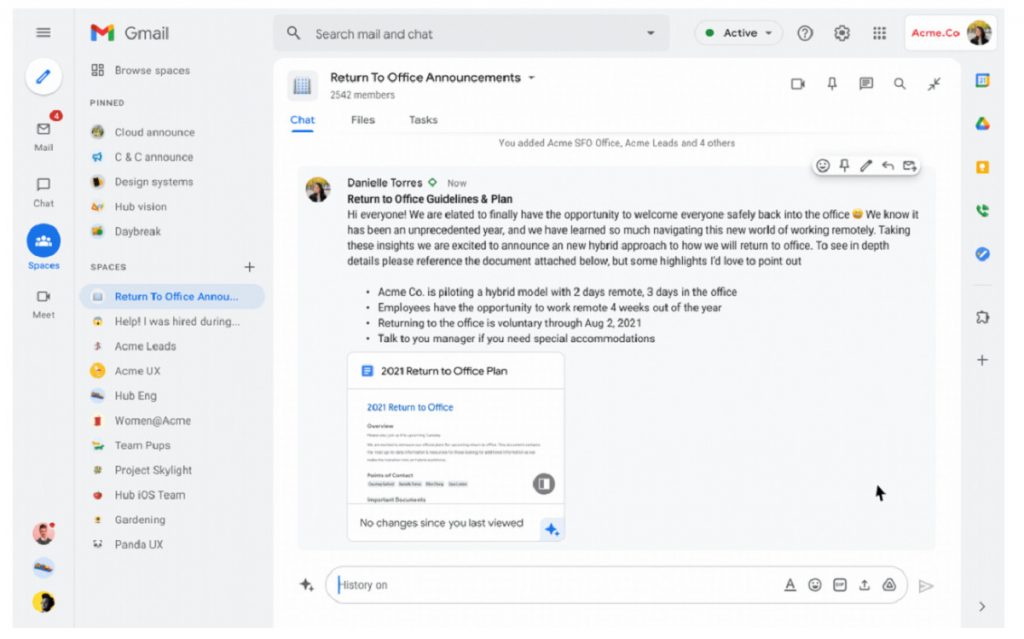 A snapshot of Spaces, the evolution of Google Workspace Rooms (c) Google

Spaces looks a lot like, well, Microsoft Teams or Slack, according to an image Google posted, with posts and replies, reactions and more. What we don’t know, of course, is whether this interface will eventually be available to consumers as well.

In fact, Google has only outlined its collaborative future in broad terms. At the moment, it all depends on which version of Google Chat you prefer.