Microsoft has begun rolling out the integrated Teams chat feature to a small subset of Windows Insiders testing Windows 11, Microsoft said this week. Learn how to use Teams Chat (officially called Chat by Microsoft Teams) in Windows 11.

If you don’t already have the Teams chat in your Preview build of Windows 11, don’t worry. Microsoft has announced that it will roll out the new functionality to a wider group of users in the coming weeks and months, and also add new features.  In fact, Windows 11 adds Insider Build 22000.100 Teams Chat for all (or at least the majority) of the insiders in the Dev Channel.

What is Teams Chat?

Microsoft has been trying to integrate chats or chat-like features into the Windows taskbar since My People debuted a few years ago. It turned into Skype Meet Now for Windows 10 and now Teams Chat for Windows 11 – one of the new features in Windows 11 that Microsoft is slowly rolling out as it prepares for a fall launch. Presumably, the Teams chat simply appears in the taskbar; at the moment, Microsoft states that you need to reboot so that the small, purple, movie camera-shaped icon appears, although rebooting is part of the process to upgrade to a new version anyway.

Remember that Teams Chat is not Microsoft Teams per se, but only a small subset of it. Teams Chat has two main functions: (text) chat and video calls, which are called in Teams Chat Meet. You can work within Teams Chat, or click the button at the bottom of the pop-up menu to launch Microsoft Teams yourself. In a blog post, Microsoft explained that the company has added Teams Chat to Windows 11 to facilitate multitasking, as opposed to the fact that it dominates your attention on a smartphone by occupying the entire screen.

How to start Teams chat on Windows 11

To start the Teams chat, you can either click on the Teams chat icon in the taskbar or use the keyboard shortcut Win + C use. Of course, you must be logged in to your Windows account to use this new feature.

When you start the Teams chat, you’ll see a short list of your recent chats and the people you’ve been chatting with, as in the graph below. Of course, if you click on the individual chats, the chat itself will open. 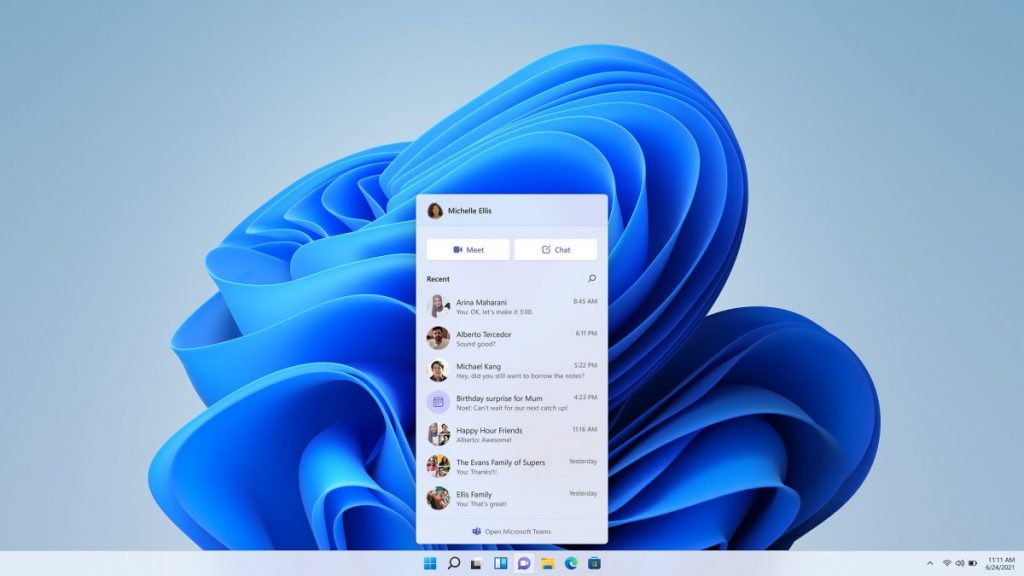 If someone from your contact list (or not) wants to chat with you, a notification will pop up, along with the ability to reply inline.

How to use Teams Chat in Windows 11

If you want to initiate a new chat with a new contact, you can do it in several ways. If the contact is already known to you, you can simply click on the name of the contact. This contact could be found in Teams, Skype and Outlook. (Interestingly, Microsoft separates Teams chat from both Skype and Outlook; you have the option to sync your Skype and Outlook contacts, but Microsoft won’t pull them in automatically if you don’t want to). You can also pre-populate your Teams Chat contact list by downloading the Teams Mobile app for your smartphone and enabling contact sync-which Microsoft says can take up to 24 hours at this early stage.

If the contact you want to chat with is completely new, you can add it through his email address or phone number. You will then receive a message inviting you to teams and your chat. If you want to set up a group chat or video call, Teams Chat will prepare a link that you can then send to the group.

Chats are text-based, of course. Calls use the Microsoft Teams video interface. Again, video calls have not yet been implemented at the end of July, but they are on their way.

At the moment, this preview of Microsoft Teams chat, made available to Windows Insider testers, contains only a limited subset of what should be offered over time: individual and group audio and video calls and meetings, presence and status settings, screen sharing, and more. So if you don’t see these features right away, just wait and see.

This message was updated on July 26 with additional details about Teams Chat in Windows 11.