The new MU-MIMO-enabled powerline set with WiFi 6 under the microscope. […] 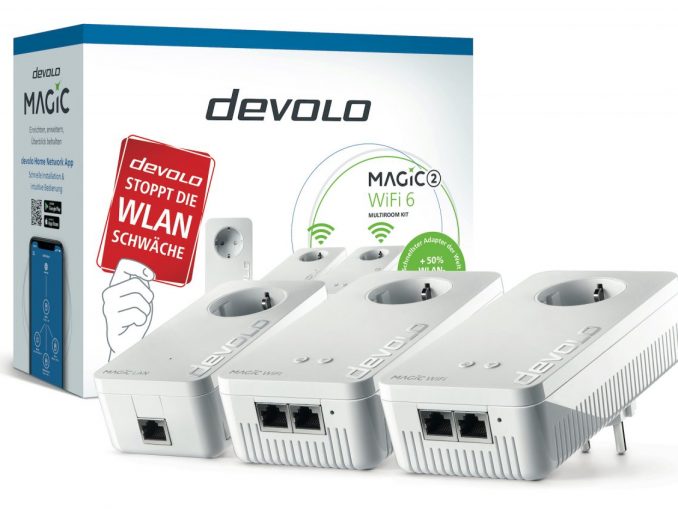 The multiroom set, which consists of three adapters, combines Powerline technology with Wi-Fi 6 and thus aims to ensure a seamless and above all high-performance data throughput in your own network. The tiny but important difference to other network devices: the devices are based on the powerline communication technology. This uses the conventional 230 V power lines of an apartment / house as a carrier medium for the network. This turns an ordinary socket into a “network socket”. Two exciting Wi-Fi-6 features of the set are the so-called bidirectional MIMO function (Multiple input Multiple Output) and the Target-Wake-Time functionality (TWT for short).

Why is bidirectional MIMO a real added value? Because practically every adapter can simultaneously send and receive different data streams to different end devices via integrated multiple antenna technology. Previously, the maximum data stream was always determined by the slowest client on the network. TWT, on the other hand, promises more efficiency because it can steer radio traffic into leaner paths: devices that do not send or receive for a longer time can be sent into a kind of sleep mode and thus save energy or battery capacity.

The bottom line is that when using Powerline technology, the multiroom set can achieve up to 2400 Mbit/ s and a range of up to 500 meters within a typical house wiring. In addition, with Wi-Fi 6 max. 1800 Mbit / s (1200/575 Mbit / s), with which the entire available network radius and the speed can be significantly increased again.

The tested multiroom kit consists of two satellite adapters with Wi-Fi 6 and a base. The set can also be supplemented with other satellite devices. The base adapter has a Gigabit LAN port and is connected to a modem router via LAN cable for Internet reception. The installation runs without software and is completed within a maximum of two minutes. It is sufficient to plug the adapters into sockets one after the other – and simply wait. The adapters find each other, synchronize with each other and automatically open a mesh network – that’s it.

The successful procedure, also referred to as “pairing” in technical jargon, is always signaled visually by a constantly glowing LED on the devices. If this automatic synchronization does not succeed, the adapters can of course also be paired manually. This procedure, which is done in three quick steps, is also shown in the illustrated supplement. If the adapters are calibrated to each other, the devices can be placed in the appropriate rooms as desired and connected to the end devices such as a network storage, TV or Blu-ray player.

After commissioning, the three devices automatically set up a mesh network under a single SSID. In the Powerline speed test, the set impressed with high data rates of around 980 Mbit / s – in the best case. This makes the starter set predestined for (parallel) 4K video streaming, gaming and access to network storage to shovel large files from A to B in the network.

If Wi-Fi 6 is used, the multiroom kit – in the optimal case (direct visual contact, about 10 meters distance) still with a stable 760 Mbit / s – is an absolute top value. After 50 meters and an intervening wall, there are still 365 Mbit/s left, at a distance of 100 meters we still measured 169 Mbit/s. The Devolo app “Home Network” (for iOS and Android devices), which can be used to set up typical functions such as a parental control or a guest network, also impressed in the test.

Devolo’s Magic 2 WiFi 6 Multiroom Kit is a high-performance and easy-to-install networking solution for the home. With the triple pack, large data streams can be transferred safely and quickly over a long distance. The very easy administration with the app also fits into the excellent overall picture of the mesh solution.