Nokia has jumped on the current tablet hype and has introduced the T20, a device that wants to stand out through haptics, battery performance and a reasonable purchase price. Our test shows whether this will succeed. […] 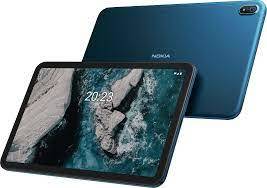 Since 2014, the demand for tablets has been constantly decreasing. Laptops have become too small and compact, and smartphone displays are getting bigger and bigger. This trend has only changed with the pandemic. Being able to make office calls and work on a laptop at the same time, video telephony from the comfort of your home sofa or streaming from the bathtub – these demands have increased enormously over the past year and a half. And voilà: 2020 was the first year since 2014 in which tablet purchases have increased again.

Of course, this trend has not remained hidden from the manufacturers either, and so Nokia has presented a tablet for the first time after 7 years – the Nokia T20. As usual with Nokia, Android One runs on it as an operating system and Nokia guarantees two more versions of the open–source operating system – so the tablet is guaranteed to be updated to Android 13, including security patches and without annoying bloatware. As already mentioned at the beginning, Nokia is positioning itself with the T20 in the mid-range segment, comparable to Samsung’s A-Series – streaming, surfing, chatting is the maxim.

The Nokia T20 is a slim, slim and no-frills tablet. The back is coated with a discreet, metallic material and comes in the typical Nokia blue-green colors. This gives the T20 a modern look. It is a small and lightweight tablet. It measures 247.6 × 157.5 × 7.8 mm and weighs just 470 grams. If you compare the tablet with the popular iPad series from Apple, the T20 is even below the iPad Air in terms of size.

The T20 is also quite robust. The housing is made of aluminum, the display is made of tempered glass and IP52 with dust and drip protection. Unfortunately, it was not possible to find out whether the display is a certain Corning grade, Nokia just calls it “safety glass” – but it makes a robust impression. Along the bottom edge there is a USB-C port for charging, while in the lower left corner there is a 3.5 mm headphone jack for those who have not yet switched to wireless headphones. There is a volume control on the right side of the tablet and a power button on the top.

The Nokia T20 has a 10.4-inch display with a 2K resolution (1200 × 2000). According to the manufacturer, the maximum brightness is 400 nits – so both are the highest average values. After all: the tablet is certified according to SGS Low Blue Light. This means a low blue value in the display, which is easy on the eyes. All in all, however, Nokia is not settling in the creative or gaming sector, but – as already mentioned at the beginning – rather in the user area. The screen is always enough for that. In addition, Nokia uses an eight-core processor from Unisoc, the T610, as well as 4 GB of RAM and 64 GB of memory, which can be expanded to 512 GB.

In general, it can be said that although the performance is not bad, it is already different from more expensive devices – noticeably. Anyone who has ever had a Samsung Tab S7 or a current iPad in their hands will have to get used to the more leisurely pace. In general, however, the display is quite responsive, only loading apps can take a few seconds and scrolling could also be smoother. However, video calls were convincing – both the microphones and the speakers did a good service.

The battery didn’t let us down in the test either: thanks to 8200 Milliampère, it easily survives a day full of video calls or streaming – over 8 hours. If the tablet is used a little more “restrained”, for example, for surfing, then it also survives two working days (just barely). Interesting: according to Nokia, the T20 can be charged with 15 watts, but the Finns only include a 10-watt power supply.

Basically, cameras in tablets are superfluous – my very personal opinion. But if it doesn’t hurt, mans will stop. The 8 MP lens on the back and the 5 MP on the front are really not really up to date anymore. It’s enough for an Insta snapshot, but that’s it really. A contemporary smartphone is already moving in other spheres. There is nothing more to say about this.

Nokia attaches particular importance to the “Family Link” and “Google Kids Space” functions. Family Link allows parents to set screen time limits, as well as approve (or ban) apps remotely. Kids Space is a feature that turns the T20 into a tablet tailored to children with apps, books and videos. The young users can then also request more screen time, which can be approved at the push of a button.

The T20 is difficult to classify. On the one hand, the workmanship is really great, LTE support is anything but self-evident in this price segment. On the other hand, 64 GB of memory is really little nowadays, even in the mid-range segment, and even a 2K display is so – mmmh. However, it is surprisingly high in contrast and not bad despite the relatively low resolution. But then: 15 watts of charging power – is that still up-to-date? The bottom line is that it is a good choice if you are satisfied with YouTube consumption and surfing the net – then you will get an excellently built tablet. For higher demands, a deep grip in the pocket is already necessary.

Get a free quote
PrevPreviousNadella: the Microsoft boss sees these trends
Next6 practical tips for Google MeetNext