Home • News • iOS 15: The most important in the overview

iOS 15: The most important in the overview

Last night, Apple delivered the final version of the mobile operating system to its devices. Who gets iOS 15 and what can the OS do? […]

Beta here, preview there – now the wait is over: iOS 15 is here. Last night the update was ready for download. A whopping 3.12 gigabytes had to be sucked there. The download with the subsequent installation took (at least for me) almost 3 hours. But may also have been due to the great demand. So if you can wait until Thursday or Friday, it could happen much faster. First, however, the question arises:

What devices get iOS 15? 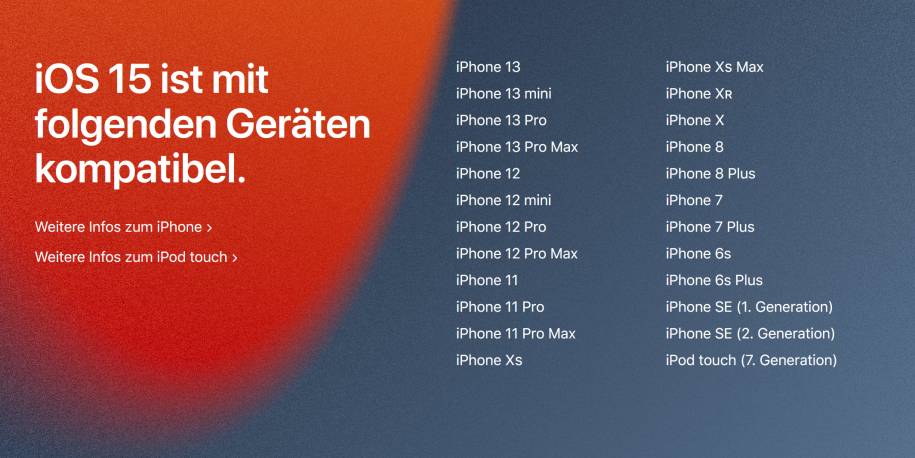 You can think of Apple, what you want. Price policy, adapter-compulsory purchase for USB-A, the controversial planned new filter – but support for devices, Cupertino is exemplary. The oldest iPhone that still benefits from iOS 15 is the iPhone 6s (and 6s Plus), which were launched in 2015. All iPhones that have been introduced since then are considered with an iOS 15 update (so also about the iPhone SE of the first generation, which came in 2016). Then the 7 Series and the 8 series of the iPhones, X, XR, XS series, iPhones 11 (including Pro and Pro Max), 12 (including Pro, Pro Max and Mini) and also the iPhone 13 series as soon as the sale has started. Last but not least, the iPod Touch of the 7th generation is equipped with iOS 15. 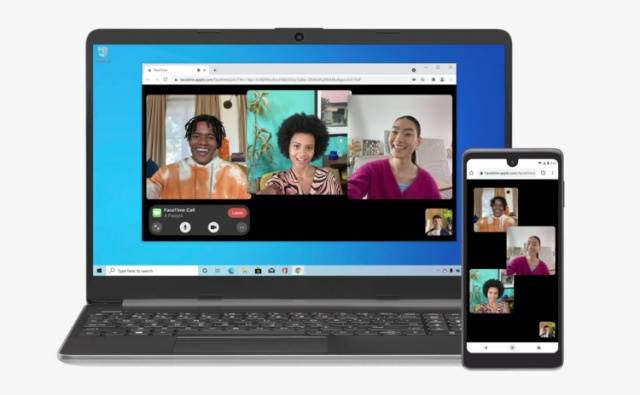 What was mentioned casually by software boss Craig Federighi is like a small earthquake: FaceTime, Apple’s own solution for video chats, will also run in a browser in the future! This is the first time that Android or Windows users can be brought on board. Considering the huge spread of FaceTime and iMessage, the service thus becomes a global competitor to Zoom, Microsoft Teams and similar services. 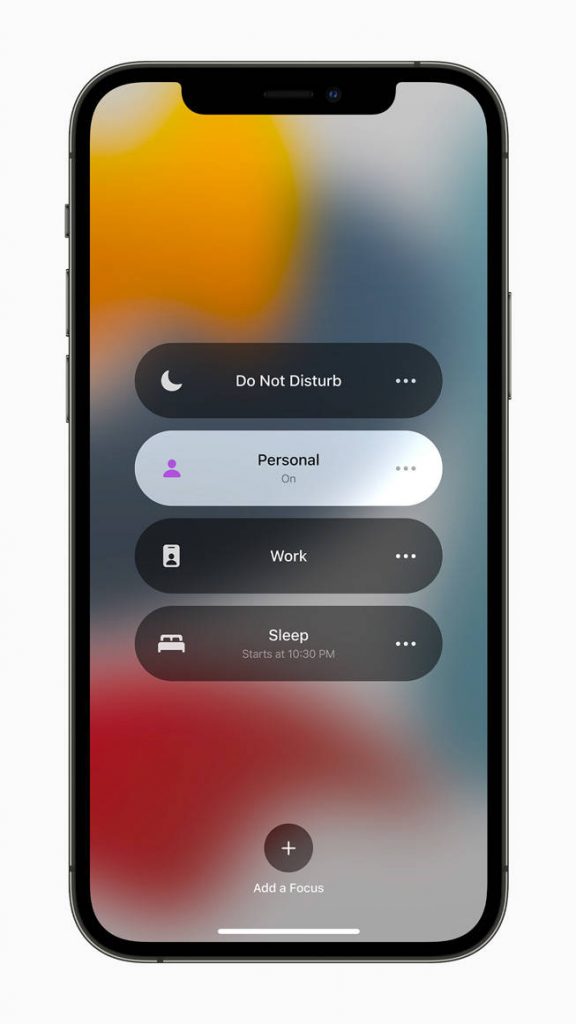 In addition, FaceTime has been massively upgraded. New is the ability to create a link on iPhone, iPad or Mac and share it via messages, Calendar, mail or third-party apps. FaceTime calls on the web remain end-to-end encrypted, leaving privacy untouched.

Focus should be a kind of” do not disturb light”. You can slow down messages, but allow certain messages to get through by means of personal mode (or the so-called working mode). Individual home screens, for example, can also be designed – there, for example, unimportant apps can be hidden for work, so that you are not distracted by them. 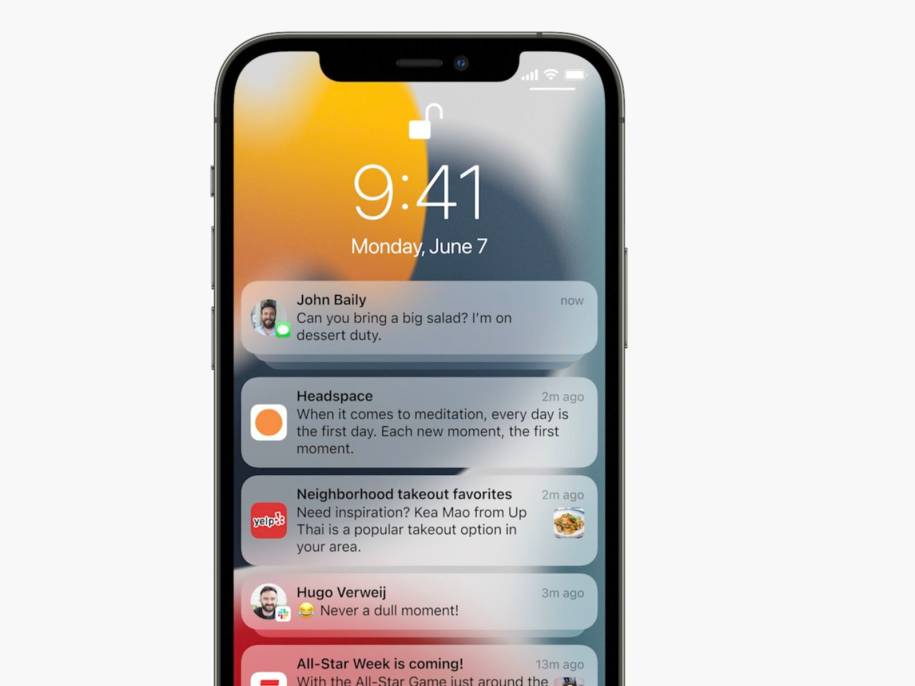 App icons on iOS 15 get larger, contact photos are displayed for people, and certain messages are aggregated and no longer displayed individually. Apps and message histories can be muted, and you can distinguish between urgent and extraneous notifications. This creates a better overview in the notification center. 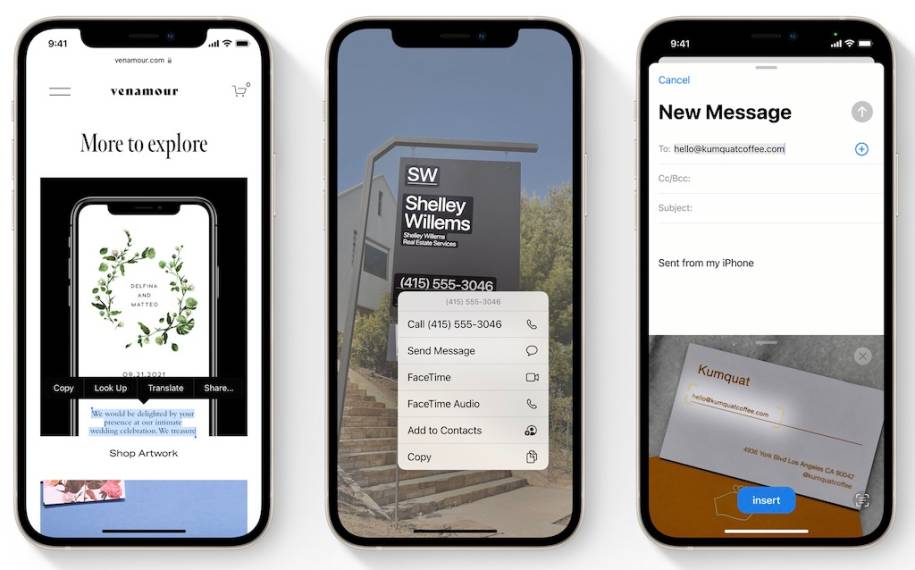 One of the most exciting new features is “Live Text”, which will be available on Macs and mobile devices. In principle, this is a built-in OCR function that recognizes texts in photos, screenshots and other pixel images. This allows users to search for the image of a handwritten note; for example, if the text contains a phone number, it can be dialled directly. In a similar direction runs “Visual Look Up”, which analyzes images and provides further information, such as flowers, animals, works of art or books. A translation feature is also on board, which can translate all recognized texts live. 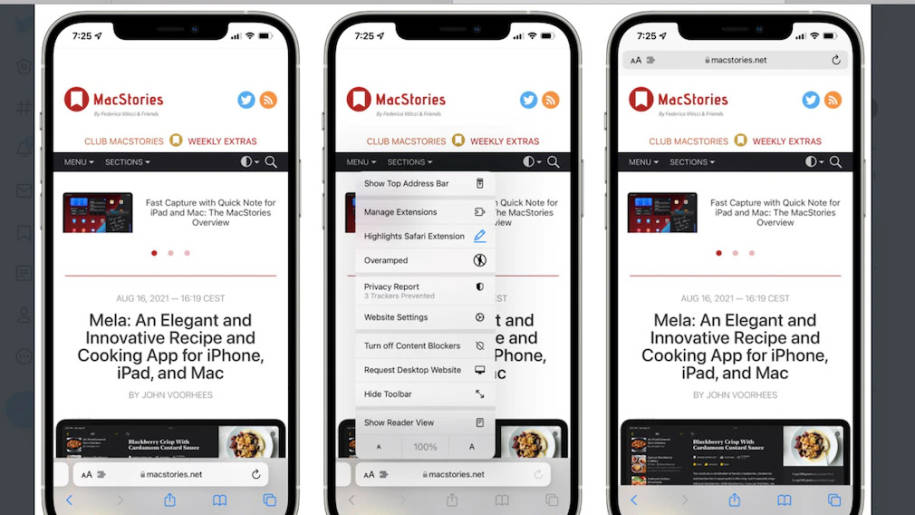 Apple’s browser has been redesigned and is now easier to use with one hand. The tab bar has been moved to the lower edge of the display. In addition, there are now tab groups à la Google Chrome. In addition, certain extensions of Safari that previously only worked on macOS will now also be available on mobile. 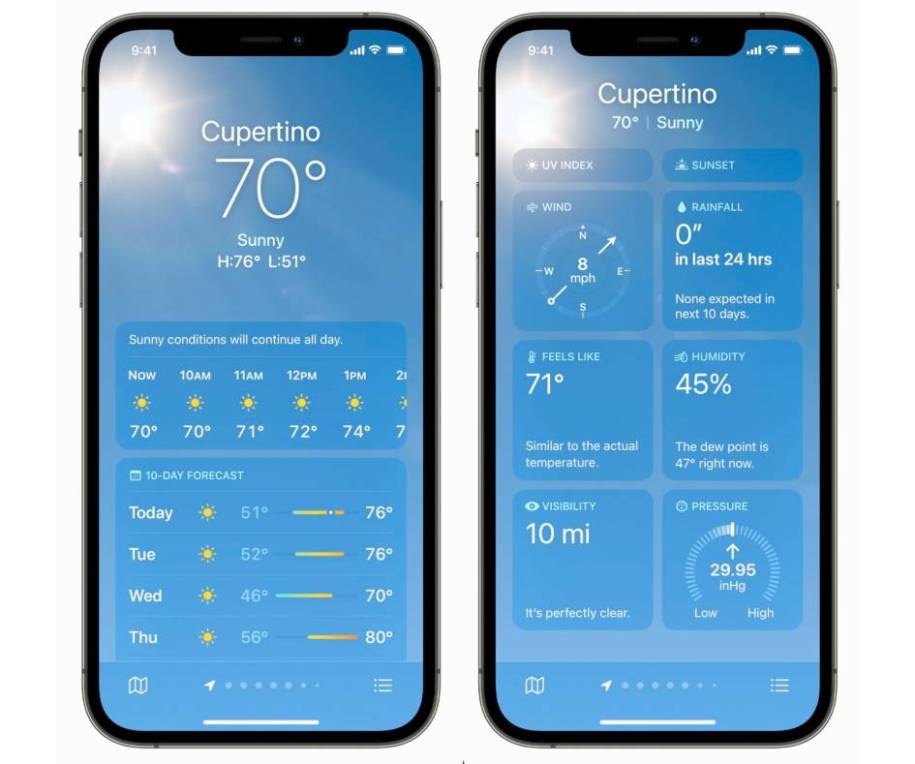 The weather app shows itself from its new sunny side. The display has been significantly expanded and changes depending on the weather. Further information and radar images are now included. All that remains now is the hope that the right data sources will also be tapped for Switzerland, so that we too can benefit from the innovations – and with reliable forecasts.

The review function has been expanded. So there is a revised highlights function with a new presentation design, revised operation and the possibility to enrich photos with content from Apple Music. 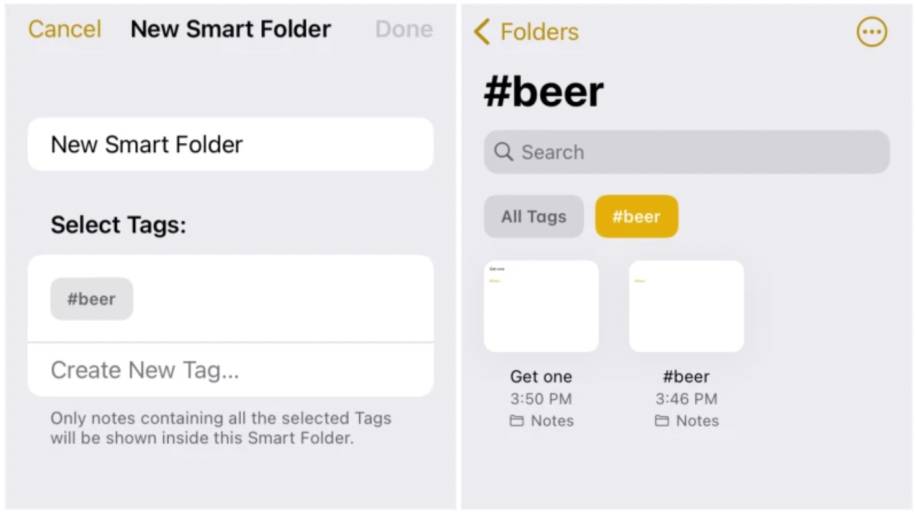 There are now tags and mentions in the Notes app, as well as an activity overview. The aim is to make it more transparent which note was updated when and to make it easier to find older notes via the tags. 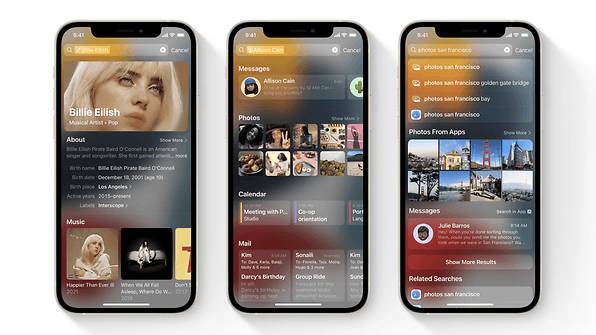 The iPhone internal search can now – similar to Google Photos-find places, people, scenes or objects in photos. Spotlight can also search for text or handwriting in photos with the new Livetext search. In addition, the image search on the net has been improved and chats in the news app as well as content shared via the news app can be found (photos, news, music, podcasts…).

“Where is?”can find newly deleted or turned off devices. These are displayed via a widget on the homescreen.

Sure, the Apple version of the emojis should not be missing. So there are new outfits, glasses, hats, eye colors and stickers – up to 40 in number.

New Apple offers the newcomers to save data for a short time free of charge in the iCloud to facilitate the move from another phone to an iPhone. There is also a revised “Transfer to iOS” function.

With iOS 15, data protection is further expanded. Siri now processes voice input exclusively on the respective device, which as a side effect should also lead to a massive boost in processing time. Mail privacy prevents senders of an advertising mail from knowing whether the message has been opened – and by whom. Among other things, this function hides the IP address to make it difficult to create a profile.

This innovation is almost delicate. As before, apps need to ask permission to do this or that, so for example, access the location. The new “Privacy Report” provides an overview of how apps use the access granted in the last seven days and which other domains are contacted.  In addition to the location, this also applies to photos, the camera, the microphone and the contacts. This could be a little embarrassing for one or the other app provider, if he was not good.

The feature of listening to songs on Apple Music together via FaceTime or watching a movie together-or simply sharing the screen to use an app together-has not yet been unlocked. Since Apple TV should also be used-or e.g. Disney+ or Tiktok-the feature “later this autumn” will be delivered via an update. More new features can be found in the overview of Apple itself.

If you have one of the iPhone devices covered by the update, simply tap General in the settings, then tap Software Update. There you will find the item Update to iOS 15. 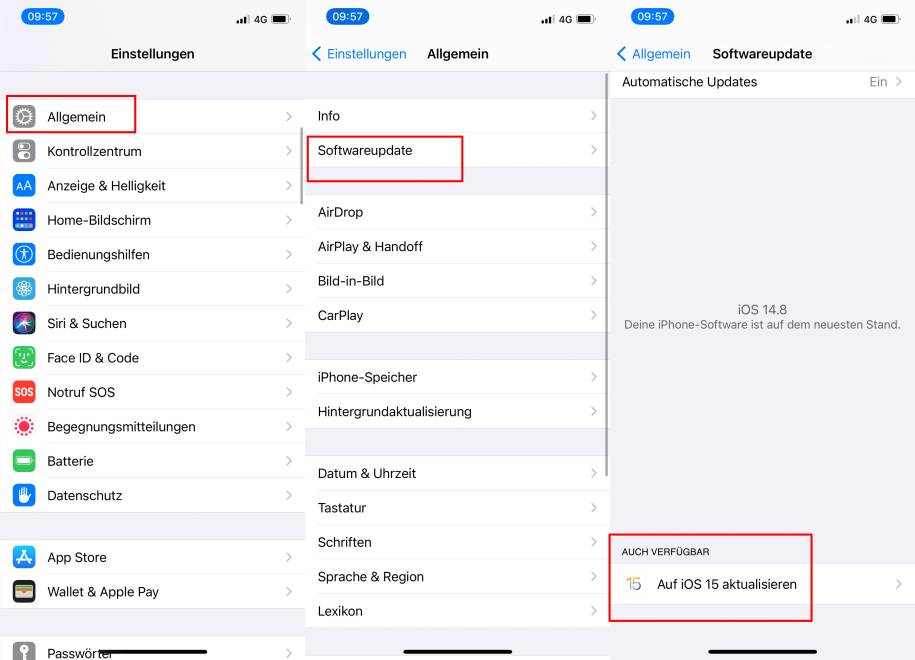 However, remember to make a backup of your iPhone beforehand to avoid any data loss. The easiest way to do this is via the cloud. Tap your name in Settings. 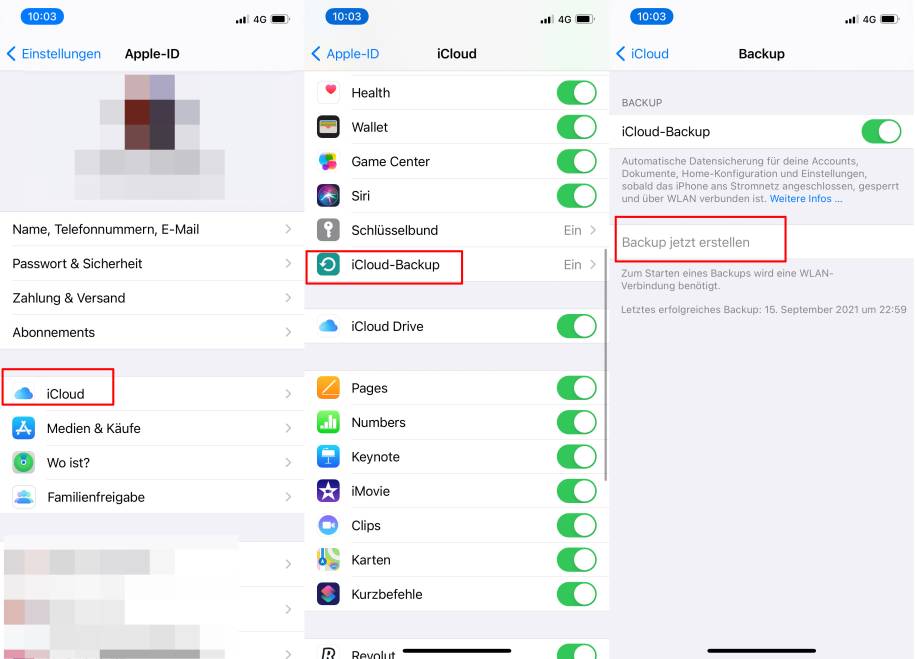 After that, tap on the item iCloud, scroll down a bit to the item iCloud backup. There you also tap on it and select Create backup now (WLAN required).

Get a free quote
PrevPreviousHow cybercriminals use AI for their purposes
NextIkea: With charging pad, the smartphone is rechargeable by tableNext