JavaScript programming from scratch in 2022: Roadmap

To make learning JavaScript programming from scratch effective, we have compiled a roadmap: 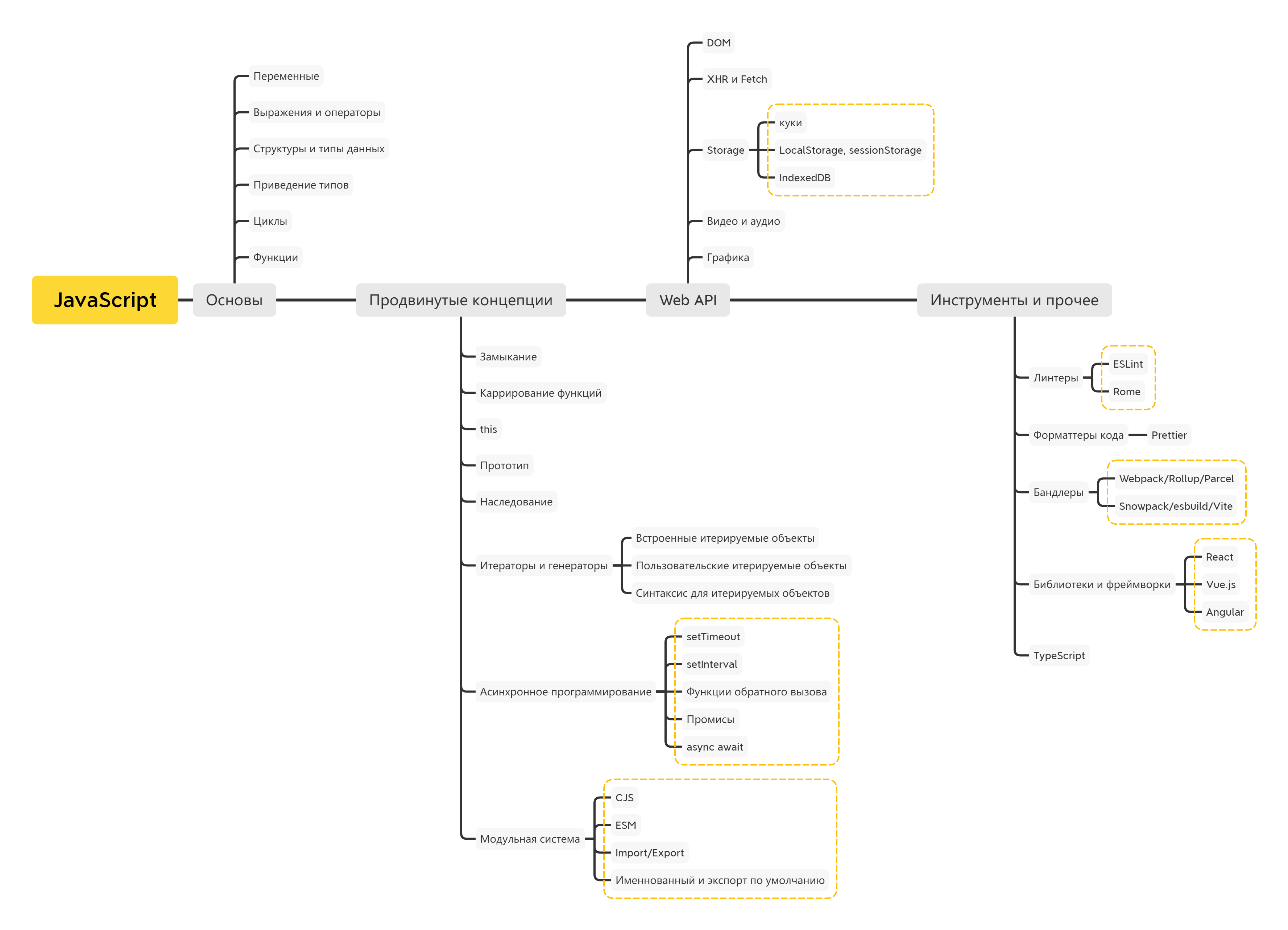 The JavaScript learning roadmap is divided into the following blocks:

Let’s analyze each of the blocks in more detail.

JavaScript borrowed most of the syntax from Java, but Python, Perl, and Awk also influenced it. JavaScript is case-sensitive and uses Unicode character encoding.

The keyword is often used to create a variable in JS let. This directive allows you to declare a local variable whose scope is limited by the block of code in which it is declared.

But for var there is no block scope: global variables var they are also available outside the block. Also var allows repeated declaration, whereas for let that would be a mistake. Try it yourself:

You can read more about data types and data structures in JavaScript here.

There are several types of loops in JavaScript:

At the same time, as in other programming languages, instructions can be used in JS break and continue.

Well, to learn JavaScript programming from scratch, you can’t ignore the functions.

You can pass arguments to functions, return results from them, assign them as values or properties. The function call performs the designated actions with the specified parameters. Example:

Learn more about functions in JavaScript.

In JavaScript, functions can be inside other functions. In this case, the internal function has access to the external variables, and the mechanism for providing such access is called closure.

This technique of working with functions is very useful for JavaScript development from scratch. Currying is the transformation of functions so that they take arguments as func(a)(b)(c), not in the format func(a, b, c).

To better understand what we are talking about, let’s look at a simple example. Let’s create an auxiliary function curry(func), which performs currying func with two arguments:

Context this varies depending on its use:

In JavaScript, objects have a special hidden property [[Prototype]], which is either equal to null, or refers to another object. This object is called a prototype:

If you plan to take the missing property from Object, but it is missing, JavaScript will automatically take this property from the prototype. This is prototypical inheritance.

In terms of inheritance, JavaScript works with only one entity: objects. Each object has an internal reference to another object, called its prototype. The prototype object also has its own prototype, and so on until the chain ends with an object that has the property [[Prototype]] equally null.

Iterators and generators introduce the concept of iteration directly into the core of the language and provide a mechanism for customizing behavior for ... of cycles.

next() can be called for alternate access to key-value pairs:

Generators also allow you to define a search algorithm by writing one function that is able to maintain its own state. A generator is a special type of function that works like an iterator factory. A function becomes a generator if it contains one or more yield operators and uses function syntax.

As the application grows, it is usually divided into many files, which are modules. A module usually contains a class or library with functions.

For a long time, JavaScript lacked the syntax of modules at the language level. This wasn’t a problem because the first scripts were small and simple. But over time, this has changed, scripts have become much more complex, and several ways of organizing code into modules have been invented.

This is how special libraries for dynamic loading of modules appeared. The system of modules at the language level appeared in the JavaScript standard in 2015 and gradually evolved. At the moment it is supported by most browsers and Node.js .

For programming in JavaScript, understanding the Web API is not just desirable, but mandatory. You will encounter the Application Programming Interfaces in JS everywhere.

The topic of the web API is extensive and complex. To understand the issue, we recommend reading the introduction to web APIs, and we also advise you to watch the available lecture:

Tools for JavaScript development from scratch

Popular linters and formatters for JavaScript:

Also pay attention to the bundlers listed in the map: choose a tool based on its convenience specifically for your needs.

As for libraries and frameworks, we advise you to familiarize yourself with our React roadmaps and Vue.js .

And here lies a detailed introductory course on TypeScript.

This material does not carry a significant training load, but only demonstrates the path of development of a JS developer, explaining some basics in parallel. Use this roadmap to learn JavaScript programming from scratch in a short time and successfully move on to the practical application of the acquired knowledge.

Get a free quote
PrevPreviousWhat process does a mobile phone go through before it reaches our hands?
NextConsumers are increasingly shopping on online marketplacesNext