Home • News • JavaScript survey: these are the most important frameworks and tools of 2018

JavaScript survey: these are the most important frameworks and tools of 2018

A recent survey shows which front-end frameworks, testing tools and tools were particularly popular among JavaScript developers in 2018. We take a look at the results.

JavaScript 2018: There is no major surprise in the front-end area

Not surprisingly, React is the best-known front-end framework used by most outsourcing developers. Almost 65 percent of the developers surveyed have used it before and would do it again. Another 19.1 percent have heard of React and would like to use the framework. Vue.js was used by significantly fewer developers (28.8 percent), but a further 46.6 percent are interested in the framework.

JavaScript: These are the most popular front-end frameworks of the year. (Screenshot: 2018.stateofjs.com / t3n)

Angular is clearly lagging behind – 23.9 percent of those surveyed have used the framework before and would do it again, but almost 34 percent of the developers surveyed said they had used Angular before but would no longer use the framework. For React this value is 6.7 percent and for Vue.js it is 2.8 percent. Basically, the satisfaction of JavaScript developers with their front-end framework has increased significantly in the last year.

There is significantly more competition in the testing area

When it comes to testing, there are two main tools: Jest and Mocha. For both, 39.6 and 39.5 percent of those surveyed said they had used it before and would do it again. At Mocha, the number of those who have already used it but want to avoid it in the future is at 8.4 percent, significantly higher than at Jest with only 1.4 percent. In addition, a higher proportion of respondents who have not yet used Jest are thinking of changing that. 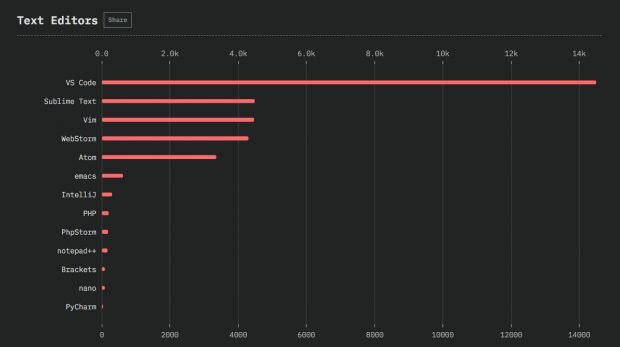 When it comes to build tools, Webpack is clearly ahead of all other alternatives. 2nd place goes to Gulp. Then Grunt, Browserify, and Rollup follow. By far the most popular editor is Microsoft’s Visual Studio Code. This is followed by the proprietary text editor Sublime Text at a considerable distance. The open source tool Vim follows closely behind. Its older rival Emacs, on the other hand, has to line up behind WebStorm and GitHub’s Atom.

State of Javascript: Here you can find our articles on the results of 2017 and 2016.

Get a free quote
PrevPreviousThe app as PWA-Pro and Contra
NextWhat is the Free Software Foundation?Next