Microsoft Teams enables many employees to work in the home office in the first place – and especially to work together. But the tool has much more on the box than just chats and video calls. […]

Many have only been in contact with collaboration software such as Microsoft Teams since the beginning of the Corona crisis. This tool also proves to be useful in the PCtipp editorial department. Although there are Teams for free (microsoft.com/de-ch/microsoft-teams/free), currently supports only the paid Teams-Version to Add Apps to the Teams, with many useful additional functions.

You can quickly find out whether your teams installation also allows apps. Click on the apps icon in the left column. If nothing appears here besides Help and calendar, you will have to do without apps in teams. However, if an overview of apps in different categories opens, nothing stands in the way of trying out these team additions, provided your IT department participates.  Some apps appear below the chat window in the form of clickable icons. Others, on the other hand, you add in your chat channel via plus sign at the top as a separate tab.

Some things that resemble an app are already included in teams as a function, for example the whiteboard for showing notes and sketches. During a team video call, click on the Share content icon at the top (rectangle with arrow), Image 1. At the bottom, you now have the choice whether you want to show your working Gspänli the entire desktop or just a specific window. Alternatively, use Microsoft Whiteboard here. 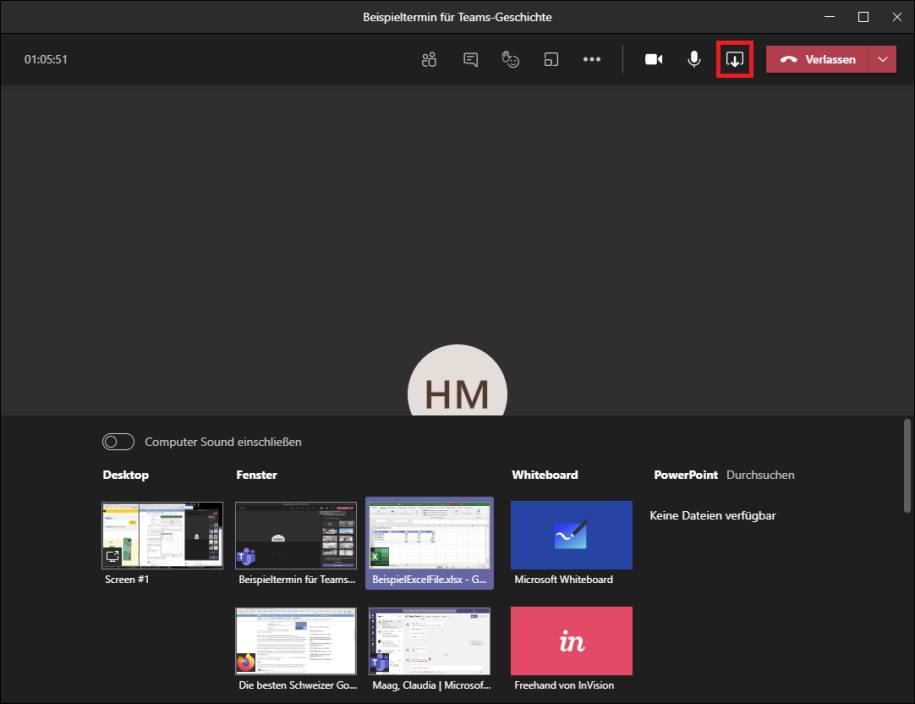 Figure 1: The window, sharing and the Whiteboard are integral components of the paid Teams-Version (c) PCtipp.ch

The simple Microsoft whiteboard, on which you can draw or sketch something with a mouse, is included by default, Figure 2. However, if you participate in the teams meeting of an organization as a user of the free Teams version, you can see the released program windows. If, on the other hand, the person activates the app Whiteboard, they are only fed with the message “Whiteboarding is being carried out”. It could be that this will change next, because the hint below sounds promising: “For now, only members of this organization can participate. Soon you can too!”It would therefore be conceivable that free teams users will soon be able to enjoy some professional functions or apps. 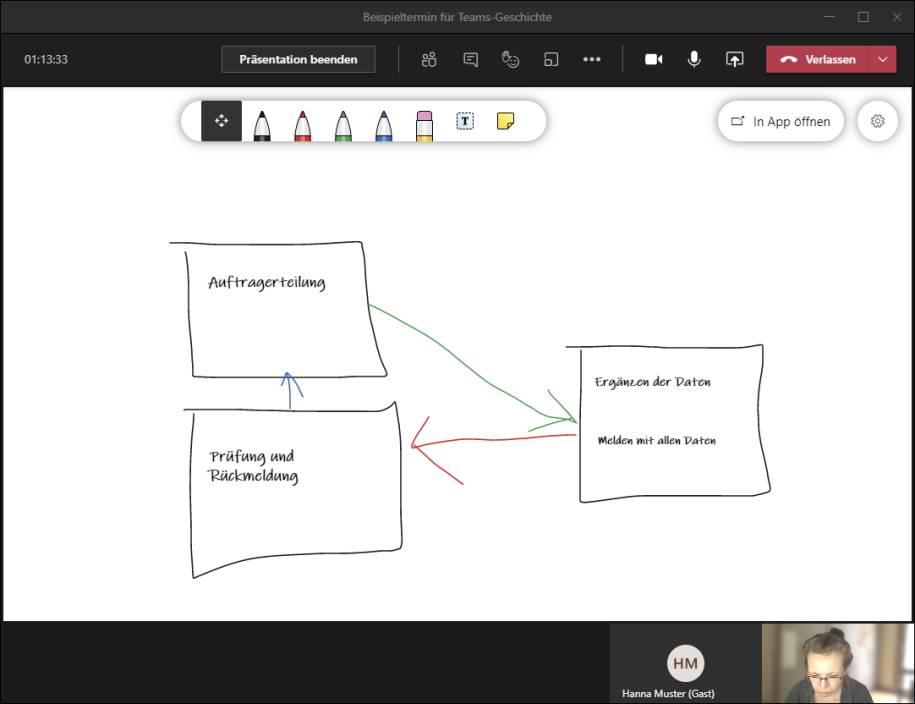 Who is free when? Who is best reachable at what times? Who is going to the office in the next few days? And how do you ensure that your virtual office can actually be reached by phone or e-mail during the published opening hours? You can clarify such questions with the app Layers integrated in teams. This is where employees enter their plans, so that the rest of the team can always find out about virtual arrivals and absences, Figure 3. 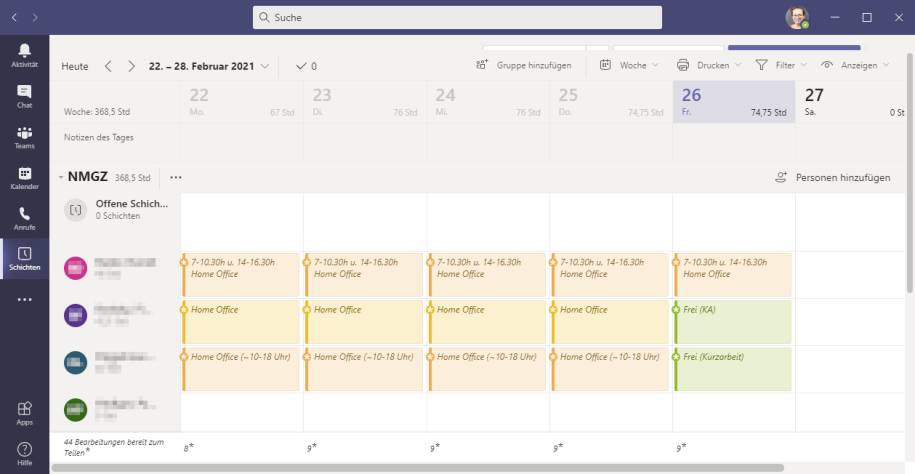 In companies, democratic means can contribute very well to finding solutions. Install the app Polly, which unfortunately currently only comes in English and is not from Microsoft. Nevertheless, it is one of the most popular apps. It is not a babble mouth, as the name and parrot symbol suggest, but is used to easily create polls (Engl. for polls or votes) in your teams chat.

When installing, you must first wave through some permissions. Then go to the channel of the team to which you want to submit the survey. Click on the Polly icon below the chat window, now go to Create New. Choose whether you want to ask only one question (single) or several (multiple). In Audience, you define the channel. Next to it, you specify whether the survey should also be sent as a direct message to the team members. Turning on Recurring allows a regular repetition of the question on certain days. Send Polly at defaults to Now.

If you want the survey to come out at another time, turn it off and set a date. The Close Polly at option determines when the survey ends. Below Question is about the nature of your survey. Multiple choice asks a question and gives respondents a choice of possible answers, such as ” Yes, no, don’t know.” With Rating, respondents can answer their question with a rating scale. Among them are some options, whether users are allowed to comment on their survey, whether the results should be displayed continuously or whether the survey should take place anonymously. Preview shows a preview of your survey. Click Send to send them, Figure 4. 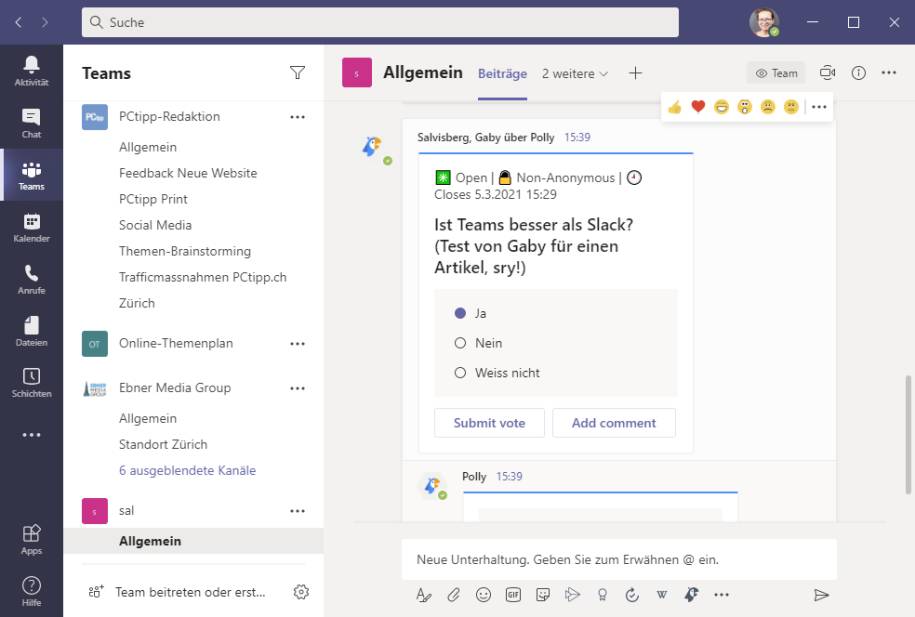 Figure 4: Even if the Polly survey tool is in English, it is easy to use (c) PCtipp.ch

If you’d rather have a German-language app for your Teams surveys, Microsoft’s own alternative called Forms is a good choice. However, it contains much fewer functions than Polly, since it is limited to simple multiple-choice questions, for example, and does without the advanced options, Figure 5. 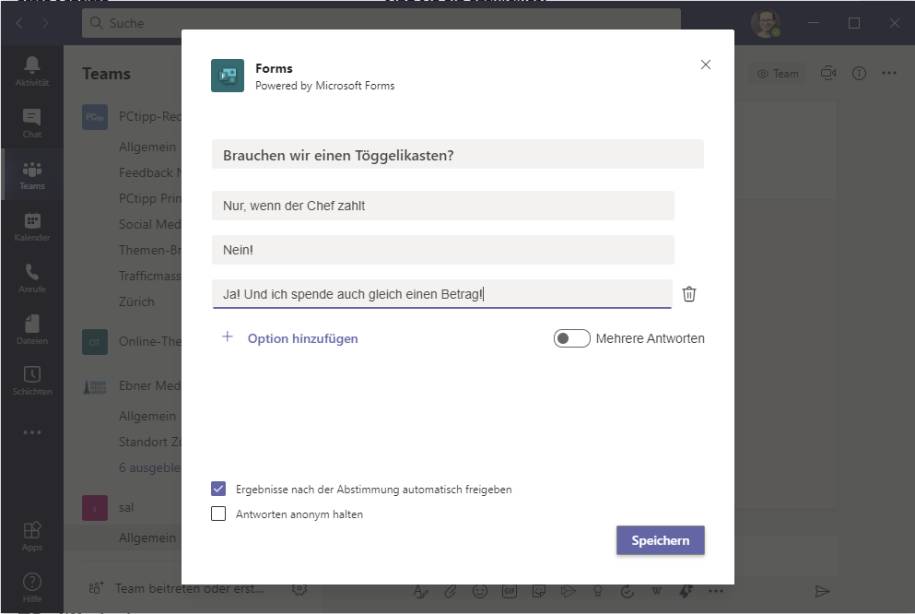 Also from Microsoft comes the Teams app called Lob. This allows you to encourage individual colleagues or thank them for their special commitment. After installation, you will find the inconspicuous praise icon under a chat window, which is modeled on a kind of order. The click on it shows a selection of possible awards that you can give out, Picture 6. If one is selected, you define the recipient and can add some personal words. 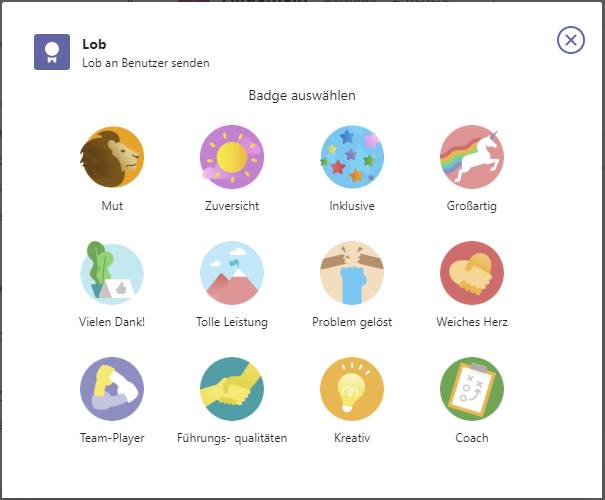 Figure 6: The app Praise makes it easier to congratulate on a special achievement (c) PCtipp.ch

The app Wiki allows you to easily record internal workflows for yourself or for an entire team and provide them with additional information, such as tables, enumerations and markers. So you will have your own little reference book in your wiki over time. This app is automatically installed on teams, Figure 7. 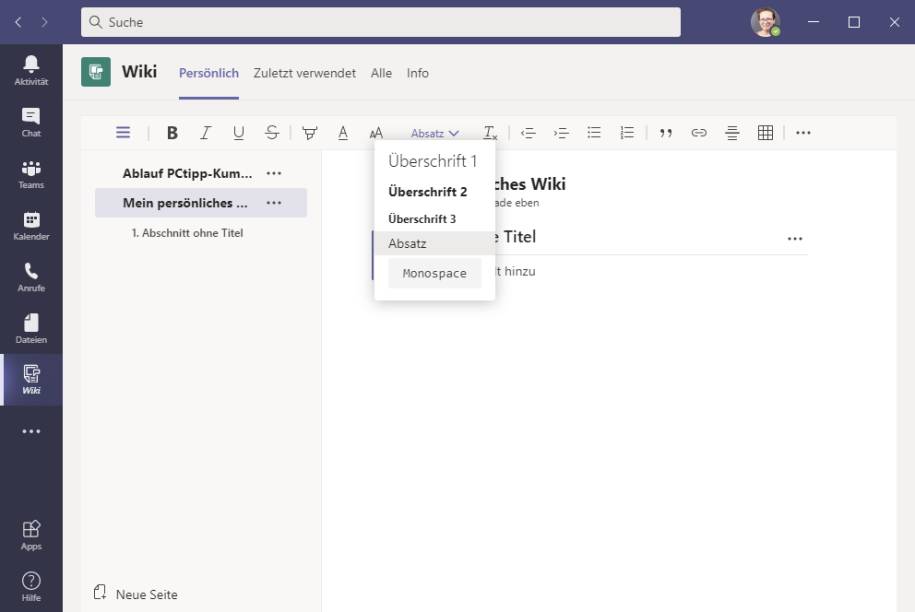 Figure 7: A wiki is suitable for holding cheat sheets and workflows (c) PCtipp.ch

Not to be confused with Wiki is the Wikipedia app, also from Microsoft. It adds a Wikipedia icon under the chat window that allows you to enter a term directly from the chat.
Online encyclopedia wikipedia.org and a link in Chat.

The Places app is likely to have more traffic, especially after the end of the pandemic. With it you link addresses, shops, restaurants etc. directly in your teams chat. After adding, you still need to set up the app; the app will prompt you for this automatically. Tell her your location. Even if the app still looks English during installation, it will end up being German. Now just click on the Places icon and type in a restaurant name or address, Figure 8. Select the desired one from the Bing results and send your message. Your team colleagues will see a map section, any reviews and also the Directions button. With it, you can save yourself a separate Google Maps search. 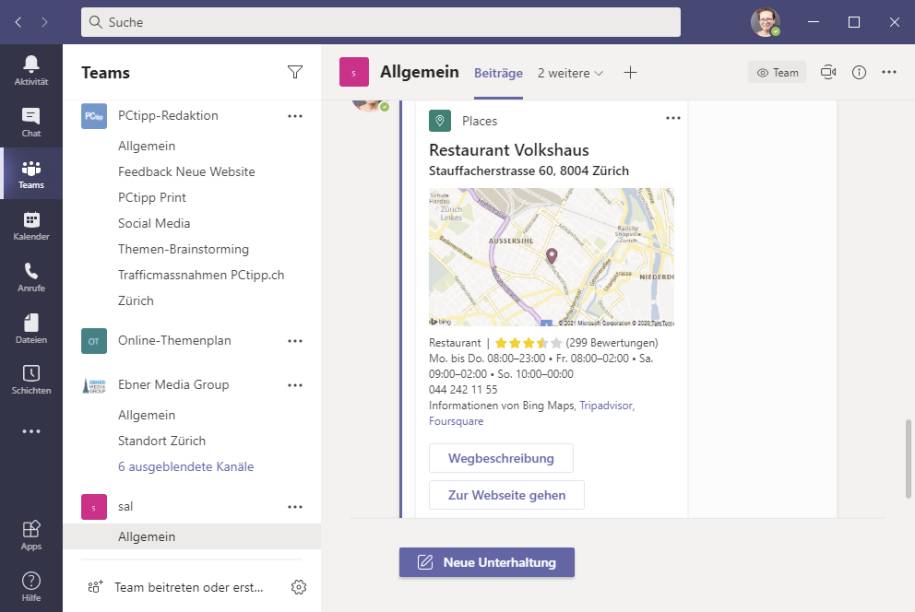 Similar to Places, Images also makes it easier to enrich your chat posts in teams. This Microsoft-owned image search has an English user interface, but finds images based on German-language terms-and also those from Switzerland, Picture 9. 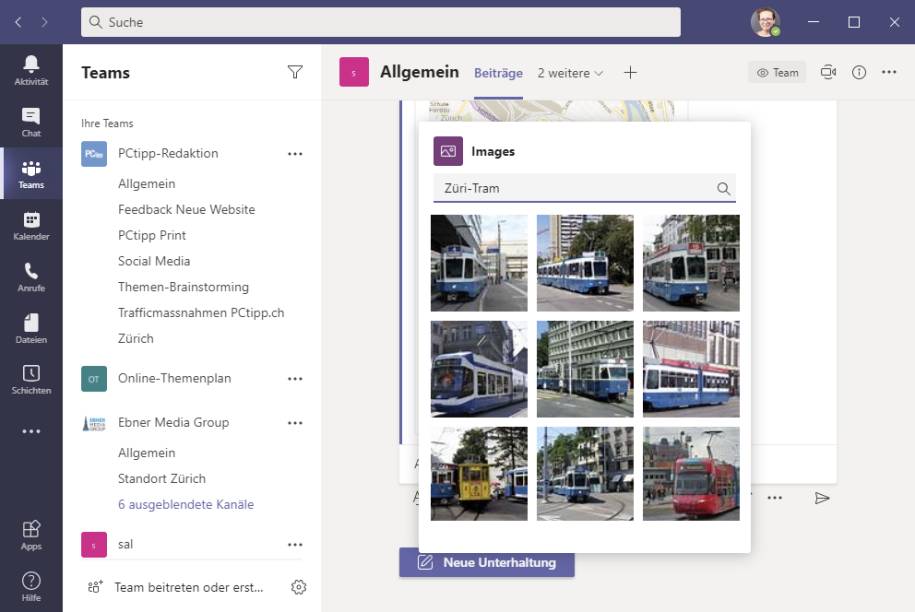 Figure 9: Use the Images app to add images to your team chats (c) PCtipp.ch

For larger companies, the app employee ideas is suitable. This makes it easier to follow up and implement good ideas within the various teams.

Many more of the Teams apps offered are integrations of products from other manufacturers. This means that the Teams integration app is free of charge, but it will not be of any use to you if you do not also have a (possibly paid))
Have an account. For example, you must log in to common drawing tools such as Mural or InvisionFreehand with the account there, if available. The integration of the remote support tool TeamViewer (see also the link), which is now available, also requires the company to pay for TeamViewer.Of course, well-known figures in terms of project management and mind mapping such as Mindmeister, Jira or Trello also have their representatives in teams, so that cooperation from a distance is easier.

If an app in teams does not bring you what you wanted, you can easily get rid of it. In the left column of Teams, click on the three-dot icon and then right-click on the app, now find Uninstall.However, some apps are not installed per user, but per team. Should one go? Click on Teams in the left column, then right-click on your team name. Select Manage Team. Switch to the Apps tab and promote superfluous apps via the
Waste bin icon in data nirwana.