As part of the Mobile World Congress, Lenovo introduced the new Android tablets Yoga Tab 11 and 13, as well as the Tab 11 Plus. […] 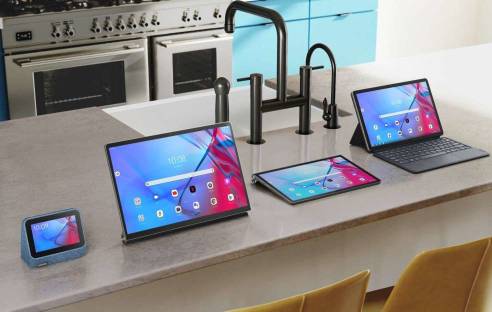 Lenovo showed three new Android tablets during its virtual participation in the Mobile World Congress: The Yoga Tab 11, 11 Plus, and 13 models are intended to combine work and entertainment for users. The two yoga models, available in July, have the integrated “Kick Stand”, which allows the tablet to be placed at different angles.

The Yoga Tab 11 is available for 349 euros in versions with 4 GB RAM and 128 GB data storage as well as 8 and 256 GB. The equipment includes a Helio G90T processor from MediaTek, an 11-inch 2K IPS display, a battery with 7,500 mAh, and four speakers from JBL, optionally there is an LTE module.

The new top model is the Yoga Tab 13 at prices from 799 euros, which appears in versions with 128 or 256 GB of data storage. The case is covered with Alcantara: the sustainable soft-touch material, which is produced in Italy, is intended to provide a special feel. The 13-inch 2K LTPS display is designed to mirrorless than other LCDs while providing 400 nits of brightness.

The tablet has a total of four JBL speakers, two of which are installed in the soundbar, while the Lenovo Premium Audio tuning and optimization with Dolby Atmos should provide even more realistic sound. The processor is the fast Snapdragon 870, which is supported by 8 GB of RAM. The battery has a capacity of 10,000 mAh.

The Lenovo Tab P11 Plus is a classic media tablet with an eleven-inch IPS display, equipped with four Dolby Atmos speakers. It also uses MediaTek’s Helio G90T processor and 6 GB of RAM. A QWERTY keyboard can be purchased as an accessory. This model will be available from 299 euros from the end of the year.

* Boris Boden leads the test editorial team for the magazines Telecom Handel and com!, he is also deputy editor-in-chief of Telecom Handel. He has been dealing with mobile phones, smartphones, and tablets for many years. No device is safe from his urge to try technical toys.