Cisco has unveiled a series of networking products that will enable companies to better connect their hybrid workforces in the future. […] 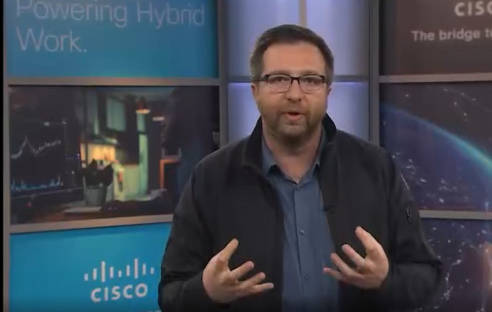 Hybrid workplace models, in which employees work both in the office and on the road or in the home office, are likely to endure. The networking giant Cisco Systems is also expecting this and has presented a bunch of networking equipment with which companies can build and manage the new mixed working environments.

“A customizable, fast, stable and secure network is no longer just a nice option for companies, but a prerequisite for a productive workforce,” emphasizes Todd Nightingale, executive vice president and general manager, enterprise networking and Cloud at Cisco on the occasion of the presentation of the innovations.

“Since March 2020, we have been seeing increasing traffic numbers everywhere. Especially the adaptation of video is a driving force here,” Nightingale explains and speaks of 30 percent more network traffic, especially for small companies and field offices, than before the start of the pandemic.

In order to meet these changing requirements for corporate networks, Cisco has added high-end switches to its Catalyst family, which are equipped with its own high-performance Silicon One chip. On the other hand, the Wi-Fi routers of the Catalyst and Meraki line were provided with Wi-Fi-6E support.

Finally, Cisco presented the cloud-based offer “Private 5G”, which is seen as a supplement to WLAN and, among other things, should also ensure easy commissioning and manageability of IoT devices (Internet of Things) in company-owned 5G mobile networks. Further details on this future offer, which will be realized with partners, will be announced at the upcoming Mobile World Congress in Barcelona.

In terms of switches for the corporate network, Cisco has shown the Catalyst 9500 and 9600X. These are equipped with a Q200 chip from the Cisco Silicon One series, which offers a throughput of 12.8 terabit/s. The new Catalyst boxes also offer 100 Gbit/s access and 400 Gbit/s core switching.

“These switches combine the advantages of routing and switching in a unified architecture that provides unprecedented performance for enterprises,” says Chris Stori, senior vice president and general manager of Cisco Networking Experiences, in his presentation. Finally, according to Stori, the network devices should be able to process 80,000 HD video streams simultaneously. “Incredibly impressive, considering that this is five times as many titles as you can find in the entire Netflix library,” Stori said.

For office environments, Cisco has also presented two high-end wireless routers for wireless network access, namely the Catalyst 9136 and the Meraki MR57, both of which offer support for Wi-Fi 6/6E networks. Wi-Fi 6E promises to make better use of the newly available unlicensed 6 GHz radio spectrum.

Both devices use a flexible triband radio unit, which allows them to travel in different frequency bands, such as 2.4, 5 and 6 GHz. The Catalyst WLAN router should also be able to automatically push compatible devices into the 6 GHz band in order to relieve the bandwidth in the other frequency bands.