Not so many expected that anymore. Suddenly Motorola comes and shows three new smartphones – the Edge 20 series. We took a close look at the flagship, the Edge 20 Pro. […] 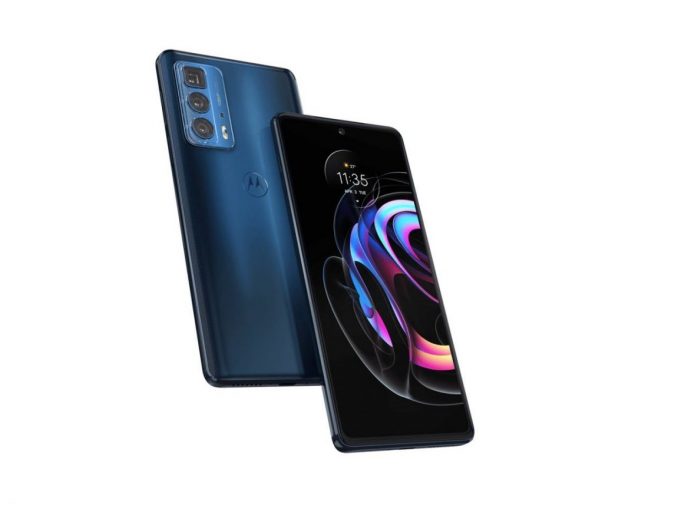 Even when unpacking, the phone is exciting, because the cardboard box contains two boxes at once. One with the phone, the chargers and even headphones in it. In the other one there is an adapter cable, a USB-C to HDMI. Thus, the surface of the smartphone should be able to be operated from the PC. Well, starting with Windows 11, this feature will then become obsolete for an Android smartphone, but this was probably not so foreseeable when designing the Edge 20 Pro. The phone itself is striking.

The design stands out from the crowd with its interesting color options (in our case, an aquamarine blue-green, depending on the viewing angle and the incidence of light, this changes), chic shape and flat display. The latter is very welcome to me personally, and elsewhere an edge- and waterfall-free display meets with a lot of goodwill.

The Edge 20 Pro is well made. High-quality materials are used that have a good fit and workmanship. The aluminum frame fits well in the hand, and the rounded corners provide a better grip. This is important, because the phone weighs 190 g. This makes it not the heaviest phone on the market, but also not the lightest. Protection against water and dust is also provided – partly. We have an IP 52 certification here. This makes it possible to write a short SMS in the rain, with coarser masses of water it becomes difficult.

Motorola’s new Pro phone is big. Even bigger than the Find X3 Pro from Oppo – it is already moving in the direction of Nokia, whose phones have recently always turned out to be quite large. Great: I couldn’t calculate the body-to-edge ratio exactly, but the front is really almost completely taken up by the display – the side edges are barely noticeable. That, in turn, makes the size of the phone acceptable. The high aspect ratio of the screen helps to hold the phone, but one-handed operation is difficult.

For audio fans who regularly want to use videos or even Netflix on the device, headphones or external speakers are recommended. This is clearly the weakness of the device.

Because unlike some other models, the earpiece can not be used as a second stereo speaker. The Edge 20 Pro has only one speaker on the bottom edge. The speaker produces a clear sound, but it lacks depth.

As already mentioned, I liked the feel very much – an underestimated feature of smartphones – because which device do we really have in our hands as often as our mobile phone? The back of the phone, which is made of glass, also contributes to this. It looks solid and valuable, but of course also has a small slip factor – glass remains glass. Motorola therefore encloses a very well-adapted case, which, once it is seated, must be properly processed in order to get it off again. I like that. In addition, it leaves certain buttons free – for example, the power button. It also acts as a fingerprint scanner. An extremely fast one, by the way.

The only downer: it is mounted relatively high up on the case – next time maybe mount it in the display, Motorola? Nevertheless, he is doing his job well.

One of the big highlights is certainly the display: a 6.7-inch OLED display with an FHD+ resolution (2400 x 1080) and a refresh rate of up to 144 Hertz. It is also easy to read in direct sunlight – you can see that in the pictures. Speaking of pictures, the Motorola Edge 20 Pro has a triple camera system with a dual LED flash and a special third microphone for the “audio zoom”, which we first heard about on the Note 20 from Samsung.

Here, the sound that you zoom to is amplified.  The other two cameras also give good results. The Edge 20 Pro’s 16 MP ultrawide camera delivers beautiful images with lots of detail and a good field of view. At night, the Night Vision option is recommended, which requires a little more patience and a steady hand.

On the hardware side, there is a Snapdragon 870. This is not exactly a Snapdragon 888, but even among power users, the difference will rarely be noticeable. The Edge 20 Pro offers 12 GB of RAM and 256 GB of usable memory. That should be more than enough for most people. However, an SD card cannot be integrated. Nevertheless, the device has coped with all the tasks that we have set for it, without becoming more than lukewarm.

Depending on whether you stare at the fully illuminated 155 Hz display all the time or whether you are satisfied with 60 Hz, the battery lasts longer and less long. With average use, a full battery is sometimes enough for more than one day. It is charged with 30 watts – rather lower limit of the acceptable in this price range. The complete charging takes about a good hour – there’s the power supply for that, which is no longer a matter of course.

The device scratches the league of the elite – but leaves even the upper-midrange competitors standing in the rain. It is a category in itself. Nevertheless: at this price you get more than you would expect. Chic.

Get a free quote
PrevPreviousEmployee Retention: How your staff keeps the pleasure of the job
NextJFrog Announces DevOps/DevSecOps Predictions for 2022Next