Review of the Netgear Orbis RBKE963

Endless distances thanks to WiFi 6E? Netgear’s brand-new Orbi triple pack works at over 10 times gigabit speed and is intended to cover an area of 600 square meters. PCtipp tested the mesh set. […] 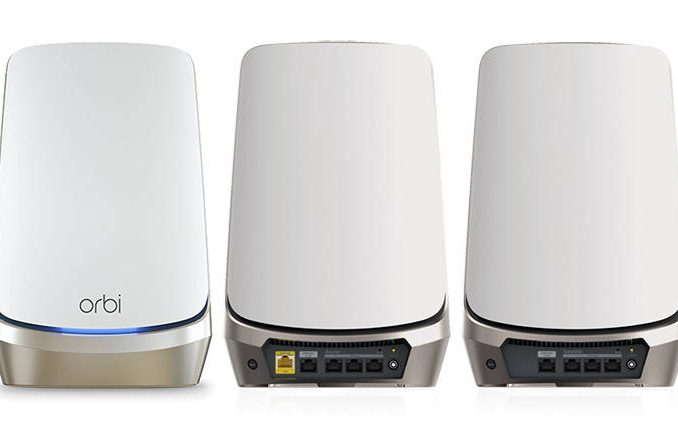 Speed and Range King: The Orbi RBKE963 is the first available mesh quadband system, which is available for a street price of Fr. 1699.95 the owner changes. And to anticipate: the set, which consists of a base and two satellite devices, is worth every cent.

Two 5 GHz bands are used (1st band: 2400 Mbit/s, 2nd band: 2400 Mbit/s), a 2.4 GHz band (1200 Mbit/s) and, as an innovation, a 6 GHz band, which works with up to 4800 Mbit/ s. All in all, Orbi achieves a gross bandwidth peak of 10,800 Mbit per second. Orbi uses one of the two 5 GHz frequency bands itself to ensure smooth data traffic between the Orbi devices. The network devices are multi-MIMO compatible (MU-MIMO) and each equipped with twelve internal antennas.

The manufacturer also has plenty of connections on the connection side: while four Gigabit LAN ports are integrated in the satellite Orbis (one each is equipped with 2.5 Git LAN), the manufacturer installs four corresponding LAN ports on the base (with a 2.5 Gbit LAN connection) plus a WAN interface where the connection to the Internet modem is established via LAN cable and even offers a top speed with up to 10 Gbit LAN. The commissioning of the set of three, which consists of three white, flower-vase-like boxes (basic router RBRE960 and two satellites RBSE960), follows the typical Netgear pattern: here, too, the app plays, with the name “Orbi” which central role.

After the app installation, the installation wizard opens and the commissioning procedure opens for the user. To do this, in the first step, the base station is connected to a free Ethernet port of the modem router, after which the satellite box is placed at its destination. If everything runs smoothly after switching on, the connection is established within a few minutes, and the Orbi mesh is ready for use.

The successful installation is visible at the top of each box by a ring shining in white. This manufacturer also secures its mesh system with a security solution “ARMOR”, in this case from Bitdefender. According to Netgear, ARMOR protects the entire mesh system, including all devices connected to this network (e.g. smartphones, tablets, notebooks, etc.), from cybercriminals and other attackers.

The Orbi app offers a transparent configuration interface, which allows the mesh system to be further individualized or expanded with guest access or parental control. In terms of speed and range: With the three Orbi boxes, an angled, three-storey house (about 200 square meters of usable space) could be completely covered by a network in the test. Depending on the location and reception quality, the radio cell changes automatically (of course, with the same network name) in order to provide the user with the best possible signal.

With its “Orbi” RBKE963, Netgear is launching a mesh router system on the market that has no equal so far. Pluses are the huge range, see high and constant data transmission, which the manufacturer spices up with a clever security mechanism.