Home • News • Safe is safe: Boxcryptor and the cloud

Safe is safe: Boxcryptor and the cloud

Sometimes there is a lack of confidence in the discretion of a cloud service. Boxcryptor is free and encrypts the data so securely that the cloud provider becomes a minor matter. […]

Anyone who opposes cloud services on principle shoots himself in the knee. Today, these digital turntables are a must in order to exchange data efficiently and conveniently. The topic is an old hat, because already in the mid-1980s the e-mail protocol “IMAP” was introduced, with which the e-mails remain on the server and are kept in sync on any devices – and this form of the cloud is still indispensable today. On the other hand, the synchronization of the address book between the PC and the smartphone can be done without the cloud, but the process is much more exhausting and prone to errors.

But at a time when the Facebook subsidiary WhatsApp knows almost every phone number in the world, the address book is not the biggest concern. Rather, it is about keeping confidential data confidential. True, Google, Microsoft and Apple promise maximum security. But even if these systems were waterproof, there are still laws that, depending on the country, force cloud providers to include access for government investigations.

Encrypted in the cloud

The German software Boxcryptor counteracts this. It encrypts the data before it is loaded into the cloud. Nevertheless, the convenience is maintained, because as soon as the files are retrieved, Boxcryptor ensures transparent decryption. With an Excel file or a simple photo, the process is done so quickly that it is practically imperceptible.

At the first start, Boxcryptor automatically detects an existing Dropbox installation, which is probably due to a cooperation between the two companies, because the popular cloud service is designated as a “Premier Partner”.

What does not work

Boxcryptor is designed to encrypt individual files or folders – objects that are also manipulated in the Explorer in the classic way. But there are other data. For example, if photos are compared between the iPhone and the iPad via iCloud, then Apple uses a database that is not visible on the mobile devices like a conventional file. In addition, encryption would not make sense at all, because such data lives from a seamless comparison and serves as a basis for other apps – and this only works if the data is accessible at any time. 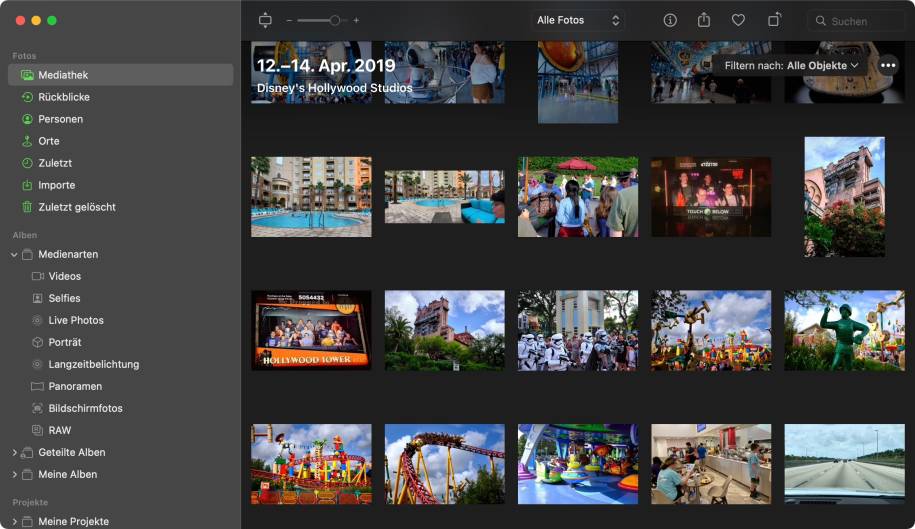 The photos on iOS and macOS are seamlessly synchronized via the cloud – but for a playfully simple use, they must not be additionally encrypted (c) PCtipp.ch

The free version of Boxcryptor is ideal for checking the water – and perhaps it is already enough for your purposes. It provides support for a cloud provider and synchronization between two devices. This is enough, for example, to securely exchange private data via Dropbox between the business and private computers – or between a PC and an iPad.

The subscription “Personal” for 36 euros per year supports any number of cloud services and devices. In addition, not only the contents, but also the file names, which could give telltale clues, are encrypted on request.

Both versions have in common that they may only be used for private purposes. A license for commercial use is available for 72 euros per year. It offers additional options for administrators to manage users and keys – but that’s not the topic here.

Call the site boxcryptor.com/de click and click the Single User button. With another click on Create free account now, you create the basis for the later encryption. Use a secure, one-time password, because this will also be used later to encrypt files. However, a different method is used so that the manufacturer cannot use these access data to view the data (“Zero Knowledge”). This security also has a downside: if the password is gone, so is the data – and irretrievably.

Next, click the Download button at the top to load the software. There are clients for Windows, macOS, iOS and Android to choose from. Special versions take care of Microsoft teams in companies and schools, while the “Portable” variant for Windows, macOS and Linux is operated directly from a USB stick or an external hard drive.

At the start, enter your account details. Done like this, a new virtual drive “X” appears, which contains the cloud service, in this case Dropbox:

Dropbox is supported from the factory (c) PCtipp.ch

The top level of this drive is not writable, only the individual cloud folders. On the other hand, Boxcryptor also works without Internet access, so that you can access your data even away from the network. However, in such cases, synchronization with the cloud storage is not possible.

Files and folders are not immediately and completely encrypted. If you simply drag a file to the cloud service in the Boxcryptor directory, you will be asked if the file should be encrypted:

The query appears when files are dragged to an unencrypted folder (c) PCtipp.ch

If you decide to use encryption, Boxcryptor will mark the symbol with a green padlock. In any case, an object can be encrypted and decrypted as desired by clicking on it with the right mouse button and selecting the appropriate command in the context menu under “Boxcryptor”.

But most of the time the motto “all or nothing” applies: then all objects should be encrypted, because that is the reason par excellence for the installation of the software. To do this, simply click on all folders and encrypt them as described. All files and folders that you copy to an encrypted directory will then also be encrypted.

But beware: From here on you need Boxcryptor to get back to the data. On the other hand, if you open the directory with the Dropbox client, you will only see the encrypted files, recognizable by the file extension “bc”: 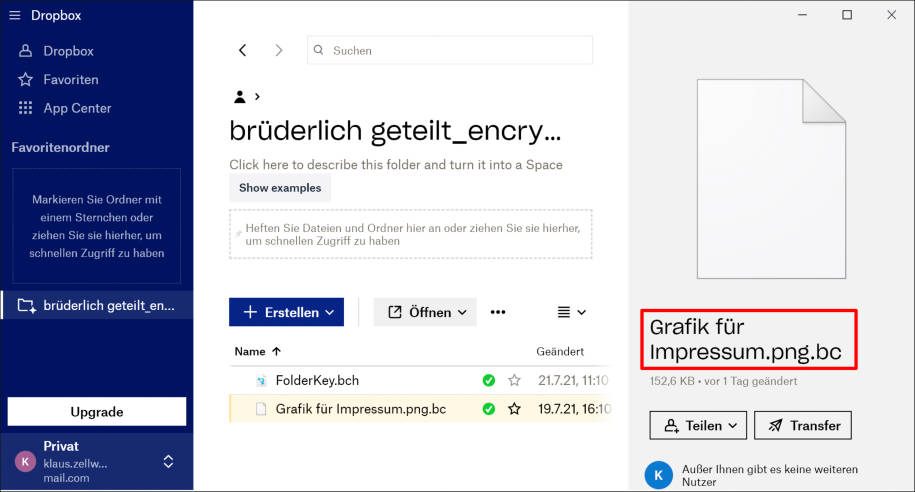 Encrypted files have the extension “.bc” and are not visible without Boxcryptor (c) PCtipp.ch

Dropbox is automatically activated by Boxcryptor when the service is installed on your computer. This can be changed quickly, but as already mentioned, the free version only supports one cloud service. To switch the service, right-click on the Boxcryptor icon in the system tray and select the Settings command in the context menu:

The free version only supports one cloud service at a time (c) PCtipp.ch

Open the Storage Locations section (A) to view all installed cloud services. For example, to get OneDrive on board, just click Connect. (B) But if you are using the free version, you must first deselect the Dropbox (C) and then make the cross on OneDrive.

On Mac, Boxcryptor works practically the same. Here, too, the encryption runs via a virtual drive that is located outside the user folder, just like all other drives: 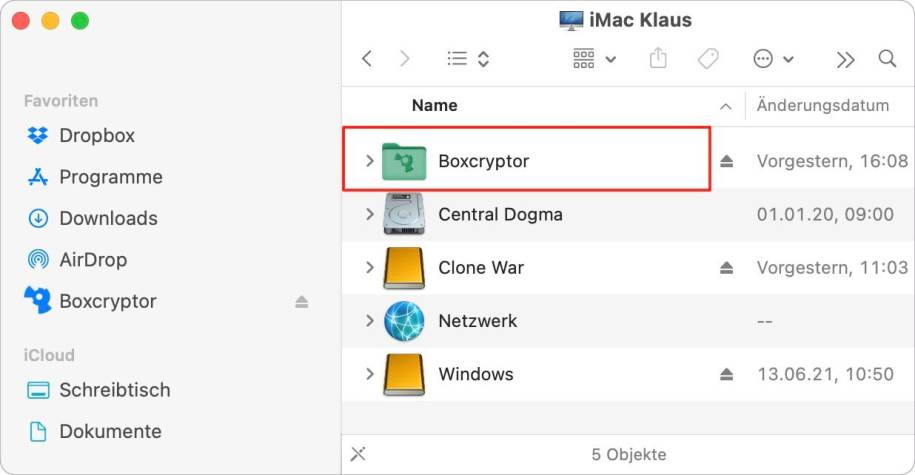 The virtual drive is located on the Mac outside the user folder (c) PCtipp.ch

You can open the settings via the Boxcryptor icon in the menu bar. If you want to enable iCloud as a service, be sure to use the iCloud entry if you also want to access the data on the iPad or iPhone. 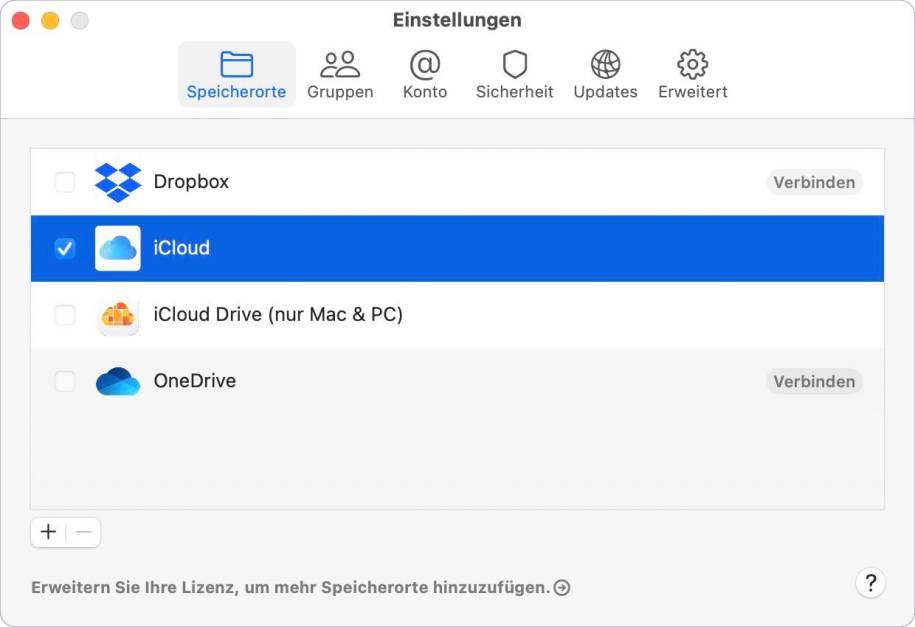 You can find the settings by clicking on the Boxcryptor icon in the menu bar and selecting the Settings command in the pop-up menu.

Get a free quote
PrevPreviousQuickly explained: the difference between vector and bitmap graphics
NextUnmanned flight solution for inspections of ÖBB infrastructureNext