Allianz CTO Axel Schell makes it clear in his keynote: It would be a mistake to think only from IT when simplifying. Products and processes must be part of it. […] 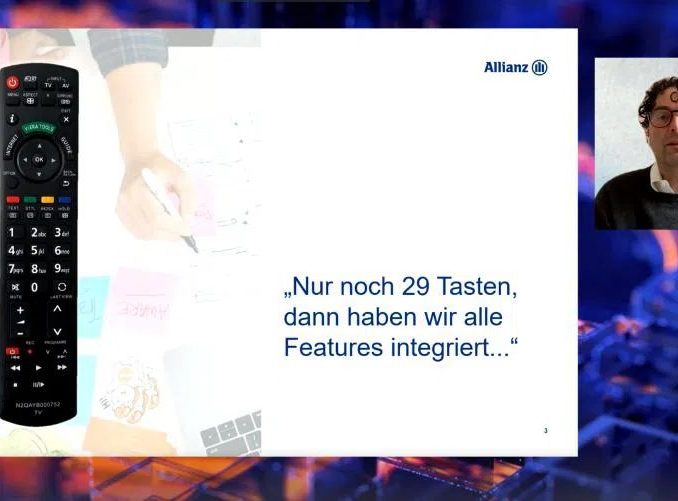 Allianz CTO Axel Schell mentions the topics of simplicity and platforms in his keynote at the Hamburg IT Strategy Days 2022. What the winner of the CIO of the Year 2021 means by simplicity, he illustrates with the example of a remote control. “Think of a remote control,” Schell asks his audience. A universal remote control could come to mind – with countless tiny buttons, of which only a small part is used in everyday life. But a remote control can also look much more reduced, says Schell. To illustrate this, he shows pictures of the Apple Remote remote control for Apple TV as well as the picture of an Alexa device.

Another example of simplification is the cockpit of space shuttles. While a picture of the cockpit in the Apollo spacecraft still shows a huge number of buttons, the cockpit in the Dragon 2 of the private US space company SpaceX looks much more reduced. Many functions for which there was a button in earlier spaceships are now based on software, Schell knows.

“But how can simplicity be learned?”, Schell asks. For Simplicity there is no school subject, no special education and no study subject. Making things simple does not mean that there is very little effort involved. The opposite is true. “Simple is the highest form of perfection,” Schell quotes Leonardo da Vinci. And I would like to make it clear that simplicity is difficult and this includes a lot of effort, maturity and diligence. Elon Musk once said, “Any product that needs a manual is broken”.

Using the example of the change in the insurance Allianz Privatschutz 1.0 to Allianz Privatschutz 2.0, Schell transfers the topic of simplicity to his employer’s industry. While the old insurance conditions were quite complicated and difficult to understand, the product was greatly simplified. The insurance conditions of the product Allianz Privatschutz 2.0, which was launched at the beginning of 2020, are only half as long and the text is much more understandable than in the previous version. Instead of 40, customers only need a maximum of eight clicks to reach their goal. The product is rated as extremely successful – sales of private protection have increased by 18 percent, according to Schell.

In order to ensure greater simplicity not only at the product level but also at the IT level, an IT Master platform was introduced that standardizes IT systems and applications across countries. Since 2018, Allianz has reduced the number of its data centers from 144 to 6. The share of cloud infrastructure in the Group is currently at 66 percent. In addition, the number of virtual workstations has been increased from 80,000 to 121,000 in the course of the corona pandemic.

Axel Schell’s keynote inspired the question “Does it spark joy?“ to provide the cleaning expert Marie Kondo not only with the cleaning in the wardrobe but also for IT. And this cleaning up is still ongoing at Allianz. By 2025, Allianz will decommission more than 60 percent of its IT applications. The Group’s ambition is to save about 250 million euros in 2027 compared to 2021. In addition to the savings, this step also contributes to simplification.

The Alliance has set itself the goal of significantly reducing and advancing the platform idea. “It would be a mistake if we thought that only from IT,” says Schell. Therefore, it is an important concern to simplify products and processes in parallel.

Examples from Turkey and Italy confirm the success of the model. In Turkey, 486 product combinations were previously reduced to twelve. In Italy, 777 old products were replaced by a single product family. This not only reduced complexity, but also increased new business.

The Allianz Customer Model and the IT Master Platform together form the so-called Business Master Platform. More than ten Allianz companies are participating in the development. Instead of several hundred, the platform now only includes 32 global master processes.

Finally, Schell shares three hypotheses for the IT of tomorrow:

“There’s never been a better time to be a real nerd,” Schell says. A lot of IT knowledge is necessary for the upcoming tasks.

Get a free quote
PrevPreviousShortage of skilled workers, insider threats and home office
NextrealityOS: Is Apple already testing its OS for AR and VR?Next