With 5G drones against drowning death

The robotics company Unmanned Life presented its autonomous search and rescue product on the New Danube in Vienna with a 5G drone fleet. […] 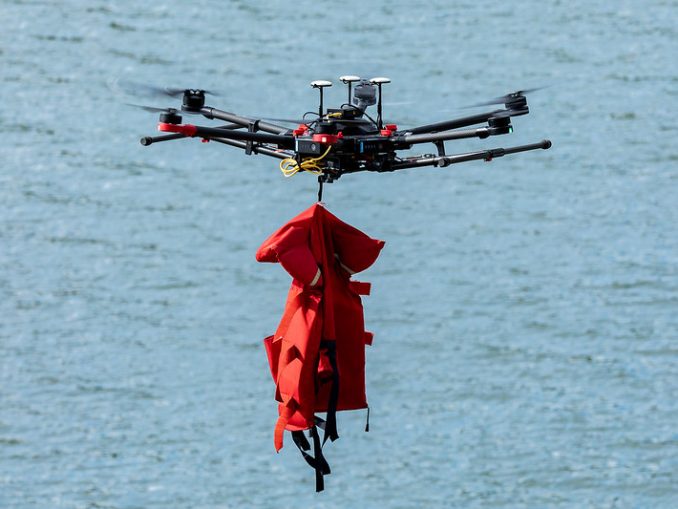 In cooperation with the City of Vienna, the Wiener Berufsfeuerwehr, Austro Control and Magenta Telekom, the demonstration showed how Magenta’s 5G network and Unmanned Life’s autonomous robotics platform can be combined to save lives. With the goal of improving the effectiveness of emergency search and rescue, Unmanned Life reduces costly helicopter flights and high staff deployment, according to information from Magenta.

“For the City of Vienna, Smart City means ensuring a high quality of life while conserving resources as much as possible and with the help of social and technical innovations. Projects such as the 5G Challenge make it possible to test and test completely new areas of application for modern technology,“ says Klemens Himpele, CIO of the City of Vienna.

“Smart city solutions make urban living spaces fit for a networked, digital future, as the example of the life-saving drone from Unmanned Life shows. The technologies required for this, such as Magenta Telekom’s 5G network, create the basis for new, innovative approaches to life in public spaces. These can play a decisive role in shaping the future of the City of Vienna,“ says Werner Kraus, CCO Business at Magenta Telekom.

Drowning is the third leading cause of death from accidental injury worldwide, accounting for 7 percent of all injury-related deaths. Currently, a combination of manned helicopters and professional divers is used in rescue operations. Such rescue operations are achieved through a high expenditure of time, money and effort. To address this problem and improve the effectiveness of emergency search and rescue, Unmanned Life deployed its search and rescue product, which consisted of a fleet of three autonomous drones equipped with multiple sensors, at a presentation in Vienna. These autonomous drones were seamlessly controlled by Unmanned Life’s autonomous robotics platform, connected through Magenta’s 5G/Edge infrastructure.

“The entire drone industry has developed incredibly dynamically in recent years, with intensive research and innovative applications being tested. Austro Control sees itself as a trailblazer and reliable partner to develop new technological solutions and areas of application and to give industry orientation in the application of the new EU regulations. The current demonstration is a beautiful example of the enormous potential of this new technology by showing how drones can save lives and make our cities safer,“ says Valerie Hackl, Managing Director Austro Control.

The demonstration on the New Danube featured two autonomous search drones that scanned the river while delivering HD live streaming video in real time. After the location of the target was confirmed, the third rescue drone took off independently and handed over a life jacket to the identified person in distress. By managing the holistic process from search and identification to providing an effective response, Unmanned Life ensured: An accurate assessment of the emergency, faster response time, lower deployment costs, reduced on-site ground personnel.

“I am very excited about the first deployment of our company in the world after the pandemic,” says Nicholas Zylberglajt, CEO of Unmanned Life. “It not only shows the potential of autonomous robotics to protect citizens and make first responders work more efficiently by freeing up to 60 percent of resources for other important safety issues in the city. It also presents to the world the ability of our team to collaborate with leading companies and institutions, deliver breakthrough innovations, and leverage our autonomous platform to facilitate autonomous deployments for non-robotics experts. The opportunity to scale and replicate this product is enormous and we will work with our partners around the world to deploy autonomous robots to positively impact people’s lives.“

Get a free quote
PrevPreviousThreat detection and mitigation: These hurdles stand in the way of companies
NextIT security risk in the home office: Identity Security reduces the risk of attacksNext