Home • News • Cloud Gaming: Is GeForce Now Worth It?

Cloud Gaming: Is GeForce Now Worth It?

You can find out how it works, possible disadvantages and the price here. […] 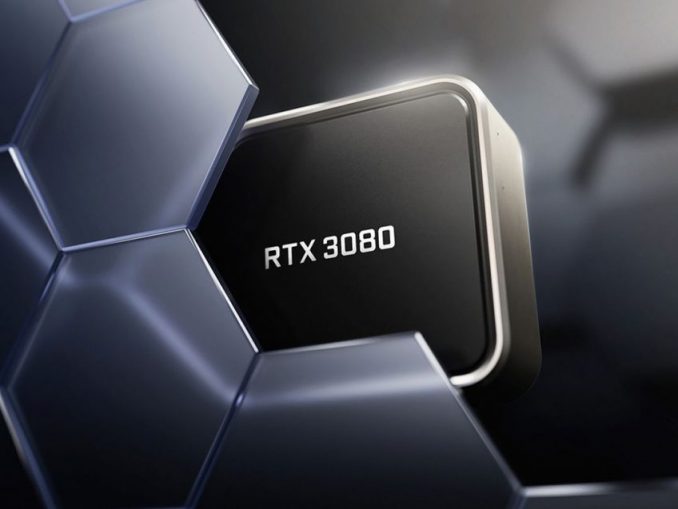 Nvidia’s GeForce Now is a cloud streaming service that targets the current vulnerability of the market: hardware availability and price. Essentially, you’re paying a subscription fee for the ability to use Nvidia’s Superpod computer to stream games from your library instead of having a physical GPU in your home PC. The company recently announced an RTX 3080 stage that promises lower latency and ray tracing-enabled performance. We will discuss the mode of operation, possible disadvantages and the price. The technology is very exciting, but can it replace a real GPU during the great scarcity? Let’s find out!

How does it work?

By using superpod computers with 1,000 graphics processors each (if you choose the highest tier RTX 3080), Nvidia takes advantage of cloud streaming to give you access to their game libraries (e.g. Steam, Epic games, etc.), so you can also play on a variety of devices. An old Apple Macbook? Sure, that works. How about an old, rickety PC with a 5-year-old GPU? That’s fine too. Even your browser could be a powerful PC now! Basically, this is hardware as a service, as opposed to software as a service, as we are used to from Netflix and Co. 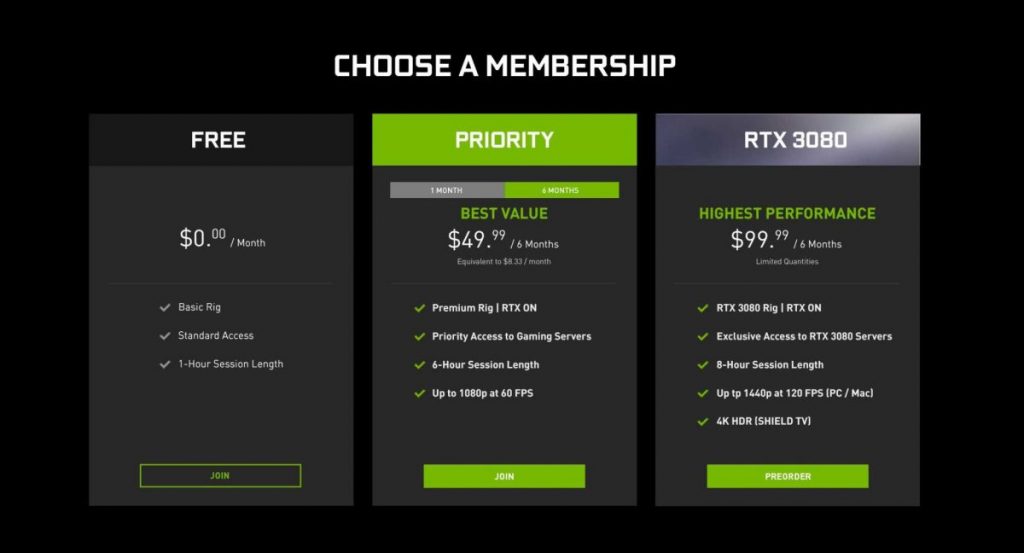 What are your options? Nvidia offers a free basic tier that limits you to one-hour sessions and entry-level hardware. You can upgrade to the priority level, which will cost you $ 49.99 for six months. With it, you get extended sessions of six hours and more powerful RTX 2080 hardware. The maximum speed is 1080p, 60fps. The new RTX 3080 stage costs $99 for six months, but you get an upgrade to 1440p at 120 frames per second on most devices. With an Nvidia Shield you can even use 4K with HDR! Here, too, eight-hour sessions are planned for long-distance gamers.

The Pros and Cons of Geforce Now Cloud Gaming

Streaming GPU performance at RTX 3000 level sounds a lot easier than standing in line at the store for days to buy one, right? Let’s look at the pros and cons of the service:

Pro: Entry-level GPUs are very expensive during the GPU shortage, so 49.99 euros for six months to get hardware at the 2080 level is a comparatively good offer. With the RTX 3080 tier for 99 euros and six months, gamers can experience ray tracing and even 4K HDR, which is a relative bargain compared to the real RTX 3080 prices (currently almost twice to three times the MSRP).

Contraindications: It’s hardware as a service; you pay a subscription fee for using a virtual GPU. That excludes the resale value of traditional hardware from the equation. You have to weigh this against the cheaper acquisition costs and the added value.

Pro: GeForce Now works on a wide range of existing systems. You can run it on Apple Macbooks, old PCs and even on mobile devices or browsers. This is an excellent flexibility and saves you huge costs for the purchase of other supporting hardware, which traditionally comes with a high-end graphics processor (e.g. high-performance CPUs, RAM, etc.).

Contraindications: The technology is not perfect. The biggest problem here is the Internet connection and latency. For the top-of-the-line RTX 3080, Nvidia recommends a connection of at least 35 Mbps for smooth performance. Problems with lags, disconnections and low–resolution buffering are commonplace for cloud streaming services if you have problems with the Internet. Although the RTX 3080 stage uses a more powerful plant, and Nvidia uses a technology with lower latency, you will get the best experience with a fast Internet connection. 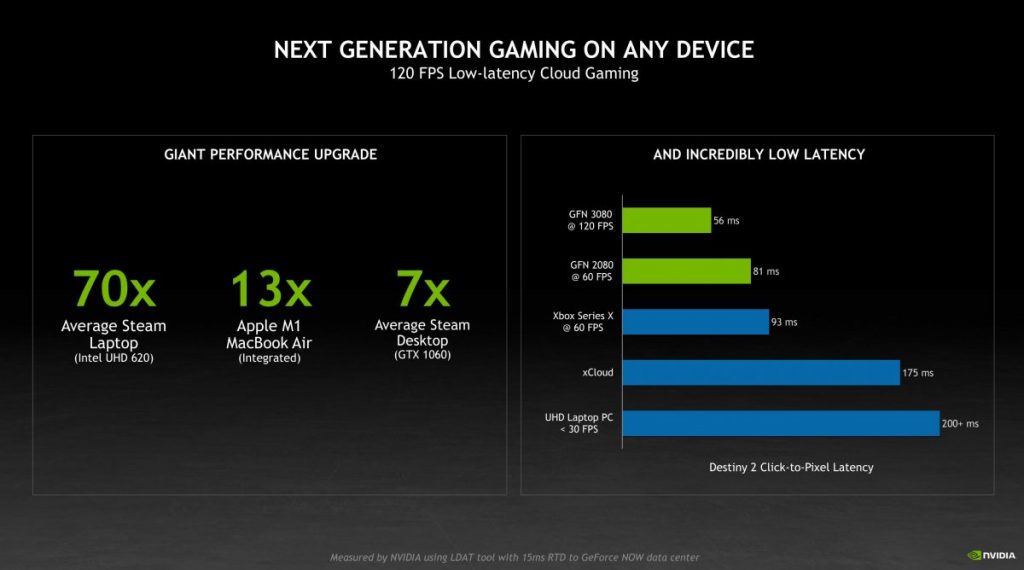 Pro: You can stream your game collection as over 1,000 games are supported. If you’ve built up your Steam collection over the years, GeForce Now gives you access to it. Plus, there are over 70 free games available, so you can get started right away!

Contraindications: Not every game you own is supported, and some game types are not well suited for cloud gaming. E-sports and e-shooter games that work best with the lowest possible latency may not be ideal. Although they are playable, but keep in mind that for optimal performance you will need a physical GPU for these types of titles. However, single-player and occasional open-world games should be possible without any problems.

Pro: If you have a solid internet connection, you can play the latest AAA tracks with high graphical fidelity, ray tracing and generally good performance. Also, you don’t have to deal with hardware issues and driver updates that come with high-end GPUs. But most importantly, you no longer have to worry about the current GPU shortage and ridiculous prices.

Contraindications: If your Internet goes down, you are out of luck for this period. If you are an enthusiast, you also have no way to overclock or modify your hardware. For some who just want to play, this may be a sigh of relief.

Is GeForce Now worth it? 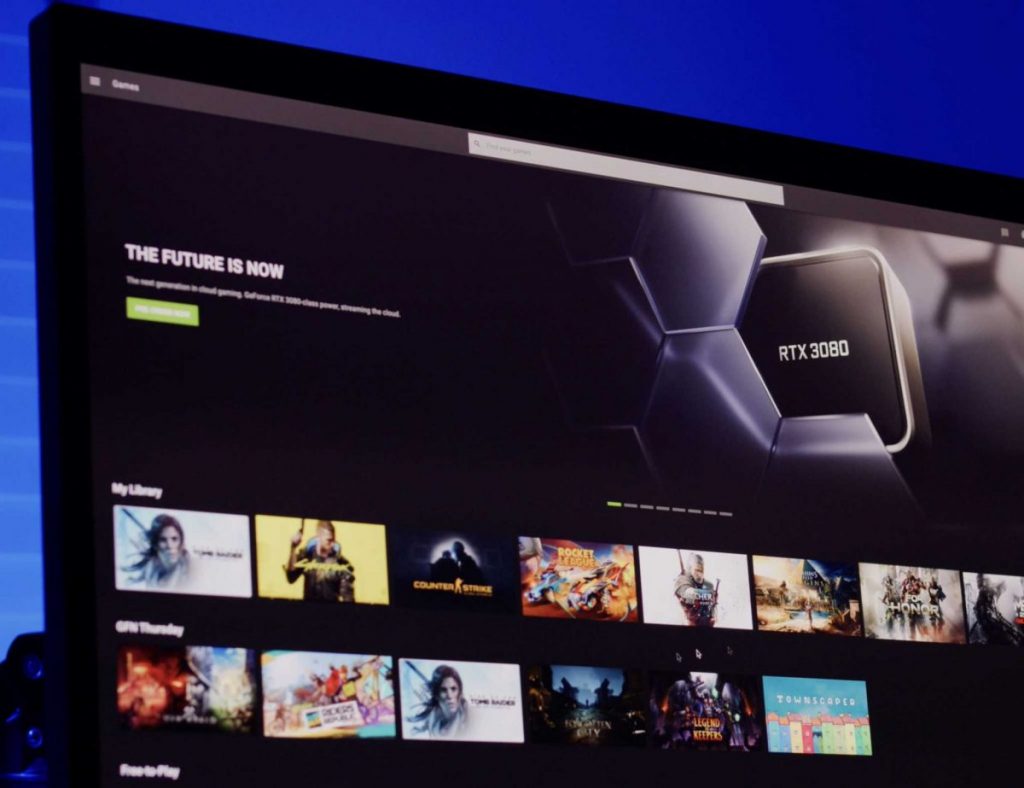 During this historic GPU crisis, Nvidia’s GeForce Now is certainly an emerging technology that can offer great value to those who want to play on powerful hardware. The technology can impress with the ability to stream Raytrace games at 1440p and 120fps. For many gamers, this service is worth a try. It might even be a good way to keep playing while waiting for the GPU market to return to normal. However, hardcore gamers still prefer a physical graphics processor, as they will find the best performance and endless crafting possibilities there. (In addition, the hardware is yours – an important point for some who do not want a subscription service).

While the underlying technology is impressive, it is not always perfect, and there are problems on the end-user side. You need a good internet and low latency to have a great experience, especially with the RTX 3080 level. While we don’t think the top-tier eight-hour session limits will be a problem for most, these are the types of restrictions you need to keep in mind on a service like this.

In an ideal world, high-performance GPUs would be available at their RRP price, and most players would have access to modern improvements in technology. Considering the current market, GeForce Now is a reasonable alternative for those who want to experience next-generation games at a reasonable price. Some may even prefer to use such a service instead of buying a GPU to stay on the cutting edge of technology.

Could PC hardware die out like the Dodo Bird or Blockbuster Video? Unlikely, but with the improving technology, streaming can certainly be an interesting option. If latency standards continue to improve and Nvidia continues to offer value for the subscription fee, it could even attract more hardcore gamers, GPU shortage back or forth. We would like something like the Xbox Game Pass to be offered, where you get great AAA games that you can keep in your library. (In addition to the free titles already offered.) It’s great to have options – especially in the current GPU market. You can decide whether you want to play on physical hardware or put your head in the cloud!

*Thiago Trevisan is a PC enthusiast with a passion for tinkering with everything from the latest CPUs and GPUs to water-cooled gaming rigs. He is originally a classical pianist and now also runs the YouTube channel Classical Technology.

Get a free quote
PrevPreviousNetflix, DAZN and Co. – How streaming services have revolutionized video consumption
NextRecognizing Good Candidates: 7 Questions for IT ApplicantsNext