Google has launched the second generation of its Smart hub. Sleep tracking is touted as a big new feature. How (well) this works and the device otherwise beats, read in our review. […] 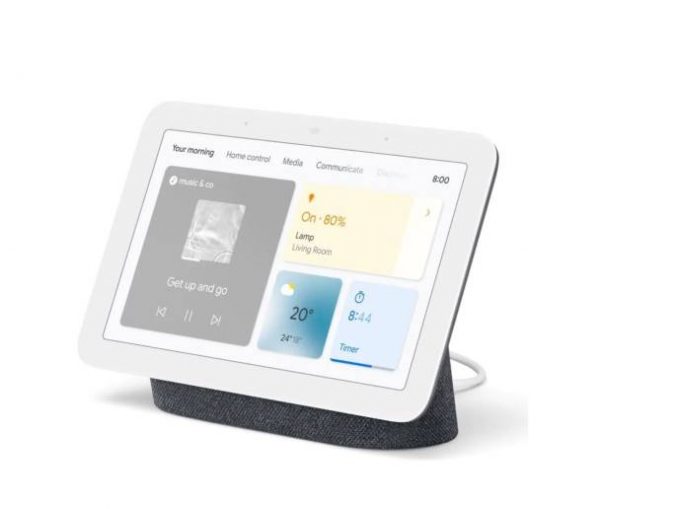 The second-generation Nest Hub is Google’s latest throw in smart display. The tech giant especially touts its sleep tracking. We have also tested this and have come to different findings. But in turn.

The Google Nest Hub 2 has the same design as its predecessor: A 7-inch display, which stands on an oval base. The device is available in four different colors.

With dimensions of 12.04 × 17.74 × 6.95 cm (W × D × H), it is slightly smaller than its predecessor. Meanwhile, the base on which the device stands can be held loosely in the hand. The speaker is also installed in this, which is why it is covered all around with mesh fabric-this serves to protect against external influences.

On the top of the screen there is a physical button to mute the Google Assistant. In addition, three microphones were installed, which record the acoustic instructions. Meanwhile, the volume button is located on the back of the screen. However, you are looking for a headphone jack in vain, as well as a USB port,with which you could charge other devices. There is a power outlet at the bottom of the device; since the display does not have a battery, it must always be connected to the power outlet.

Two things are essential to get the smart display up and running: a Google account and Wi-Fi. Without the former, nothing works anyway, a lack of the second would significantly limit the range of functions of the device. The easiest way to setup is via the Google Home app. Put the display into operation, connect it to the Wi-Fi. After that, launch the Home app on your smartphone (connected to the same Wi-Fi as the display) and add the new device. Everything else follows automatically.

The most praised feature of the new Google Nest Hub is sleep tracking. Thanks to the so-called soli radar technology, the smart display can detect even the smallest movements, such as movements of the chest or changes in the sleeping position, if it has been positioned close enough to the sleeping person. The smart display uses built – in microphones and ambient light and temperature sensors to assess how much sleep you’re getting and whether coughing, snoring, and light or temperature changes in your bedroom are disrupting your sleep.

In the test, for comparison, I wore my Huawei Watch 3 every night for a week to find out if the measured data on sleep behavior and quality of sleep are similar, and thus can be classified as reasonably reliable – you can. Especially when it comes to the duration and quality of sleep. Sleep time, sleep duration, sleep interruptions and so on were detected quite reliably overall. However, the device does not measure sleep phases. Noises such as coughing or snoring were also detected and processed together with the other data and displayed statistically in an overview. In addition, Google gives tips on how we can optimize our sleep.

The display can play a variety of streaming services, including Spotify, Apple Music and YouTube Music. The control via the voice command “Play XYZ from Spotify” worked perfectly. The quality of the speaker is fine for its size. It can sound a smaller room quite well and loudly – whereby there are distortions when the volume is too high.

Of course, video streaming also works: you can watch YouTube, Netflix and Disney+ directly on the smart display-for more streaming services, a Chromecast of Nöten.Im Stand – by mode will either display the time or the Smart hub can be used as a digital photo frame-assuming you have saved some photos to Google Photos.

Furthermore, the Google Nest Hub masters the usual functions of the Google Assistant, such as setting timers, alarms, the weather report and so on – in addition, acquaintances can be called via Google Duo. Of course, without a picture, because the Google Nest Hub has no camera installed.

The new Google Nest Hub is an interesting addition to the smart home – especially if there is no other smart assistant in the home network. The highly touted sleep tracking is solid and works without a hitch, but doesn’t offer groundbreaking innovations to a smartwatch or fitness tracker owner. Overall, an exciting assistant with audio and wake-up advantages. At the price totally fine.