Many innovation methods and terms from Silicon Valley are uncharted territory for German companies. The minimum Viable product. Here are the five most important questions – and the answers. […] 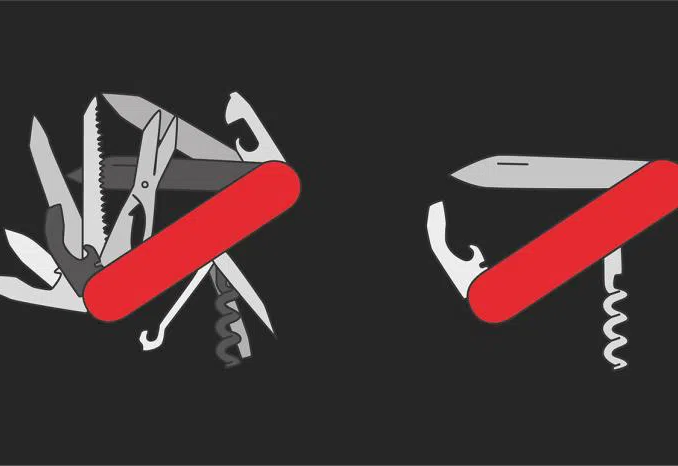 What is only sketched in the left picture actually exists in reality and is a so-called “collector’s knife” with 87 tools and 141 functions. Although it offers its owner the right tool in every conceivable situation in life, it is hardly really suitable for everyday use. I bought it many years ago for about 1,000 euros as a limited edition. It is no longer available on a regular basis. It is in my office today and is more of an exhibit than suitable for reality.

On the right is a simple but useful knife, reduced to three functions: a corkscrew, a bottle opener and a knife. It is known as the “bartender’s knife” because it has everything a bartender needs for his work. This knife is already available for around 15 euros – it has been sold millions of times worldwide.

In fact, the first knife stands for a “featuritis”, a disease that many companies suffer from, especially in the engineering country of Germany. In most cases, a project team is put together for the development of a new product, which retreats for months or even years in order to develop a supposedly perfect product in secret and in complex processes.

In an effort to satisfy all the needs of all potential customers, many companies make the mistake of offering too much at once. The result: a much too expensive product, which has all the bells and whistles, but is not needed by the customers. What often falls by the wayside instead are the actual needs of the actual target group. After all, who needs a saw, a nail file and a corkscrew at the same time? What functions are even completely superfluous? This is exactly where the MVP method, for which the second knife stands, comes in.

“MVP” stands for “Minimum Viable Product”, which means in German as much as “minimum functional product”. The term originated in Silicon Valley, where numerous young tech startups are already successfully working with the concept. They gain a competitive advantage over established companies because they can implement innovations more quickly and react more flexibly to new requirements.

Especially in agile product development, the MVP method has established itself in recent years. Nevertheless, the term is still interpreted very differently. The most common definition goes back to Eric Ries, who coined a completely new philosophy of starting a business in 2011 with his book “Lean Startup”. He describes the MVP as “a version of a new product that allows a team to gather the maximum amount of validated information about customers with minimal effort”.

Traditionally, many companies use the waterfall method in product development – a linear approach that is usually deeply embedded in the corporate culture. However, the development of an MVP is based on the principle of agile working, which works exactly the opposite: instead of creating detailed specifications over weeks or months, the team starts with a vague goal in mind and then sprints from one “pit stop” to the next to get customer feedback as quickly as possible. This is then used to continuously develop the product and adapt it to the actual needs of the customers.

Develop, measure, learn, repeat – these steps describe the cycle that makes MVPs. At the beginning of the process there is always a hypothesis that the team puts forward together. This hypothesis must be confirmed or refuted. In our example, this would be: If our pocket knife is equipped with a corkscrew, sales can be increased by ten percent within the first four weeks. Then the MVP process begins:

Those who have had little contact with agile development methods so far may initially find the MVP process less intuitive. This is especially true for highly regulated industries, where a lot of time and care goes into the implementation of new ideas. The following basic principles help to establish the MVP concept:

By ensuring a fast, lean process, companies minimize their financial risk. At the same time, you can try more ideas, identify the best ones early and discard those that will not give positive results. This allows companies to see at a very early stage of product development whether they are heading in the right direction and otherwise correct their course in time. Minimum viable products are a great way to drive innovation in the company.

It is important to anchor the understanding of this entrepreneurial and implementation-oriented approach so firmly in the corporate culture that every single employee recognizes the advantages and knows how to use them correctly. Developing an MVP is not about creating a perfect, mature product. On the contrary, often it still “jerks and wobbles” – but it works.

*Philipp Depiereux is founder and managing director of the digital consultancy and start-up forge etventure.