On the occasion of TechEd 2021, SAP presented new tools for its developer community. This ranges from ABAP environments for professionals to low-code/no-code tools for users in the specialist departments. […]

SAP is still busy closing gaps and building bridges – between the traditional on-premises software world and the new cloud cosmos with the now almost seven-year-old software generation S/4HANA. This was made clear by the announcements at the TechEd developer conference held virtually in mid-November. A lot revolved around additional tools and new learning opportunities to pave the way for customers and especially developers into SAP’s cloud world.

The direction of the SAP strategy is clearly towards the cloud. The managers of the largest German software manufacturer make no secret of this. “The future for our customers and partners worldwide lies in the cloud,” said SAP’s Chief Technology Officer (CTO) Jürgen Müller in his keynote speech at the start of TechEd. Now, however, many user companies that operate their SAP solutions classically in their own data center are wondering what this means for them.

In a session following the keynote, one participant’s question as to whether SAP’s on-premises customers would be cut off from the innovation received the most response. Viewers were able to vote live for the questions submitted. The answer of the SAP managers – evasive: Müller admitted that the majority of SAP innovations happen in the cloud. His colleague Thomas Saueressig, responsible for Product Engineering, spoke of a “cloud-first approach” and pointed out that the speed of innovation in the cloud is ultimately much higher.

However, SAP management is also clear that the customers’ journey to the cloud is not easy. The customers started from a wide variety of starting points, Saueressig stated. While some would have to harmonize and consolidate 150 SAP systems first, others made a clean slate and completed a restart in the cloud with a greenfield approach. However, one thing is true for all user companies, the SAP managers made it unequivocally clear: a purely technical migration is of little help. Rather, customers should leverage the innovation potential associated with cloud migration and drive their digital transformation.

The key to this is, among other things, the developers. SAP wants to support this with a number of new tools. For example, the Group presented an ABAP development environment that developers could use to build extensions directly in the S/4HANA cloud. CTO Müller said that by supporting ABAP in the cloud, one closes the last gap between on-premises systems and the cloud. The SAP S/4HANA Cloud ABAP Environment is based on an internal project called “Steampunk”, which is why the development tool for the cloud is also referred to internally by SAP as “Embedded Steampunk”.

Rich Heilman, spokesman for SAP’s worldwide developer community, emphasized that with Embedded Steampunk it is now possible to create custom code in ABAP on the S/4HANA public cloud system. Developers could select data directly from S/4 database tables, use S/4 Core Data Services views, or call local S/4 APIs. But Heilman also pointed out the limitations of the new ABAP development environment for the cloud. “This is not the classic freestyle ABAP that you know from on-premises systems.“

For SAP, this is about drawing clear boundaries and keeping the software core clean. Extensions should be flanged separately and connected to other software services and data sources via APIs. In this way, ABAP developments should remain upgradeable at all times and new wild growth in the cloud should be avoided. Especially in the old on-premises world, ABAP developers have often intervened deeply into the source code of SAP. This customizing is a major obstacle for many users today when moving to the cloud. 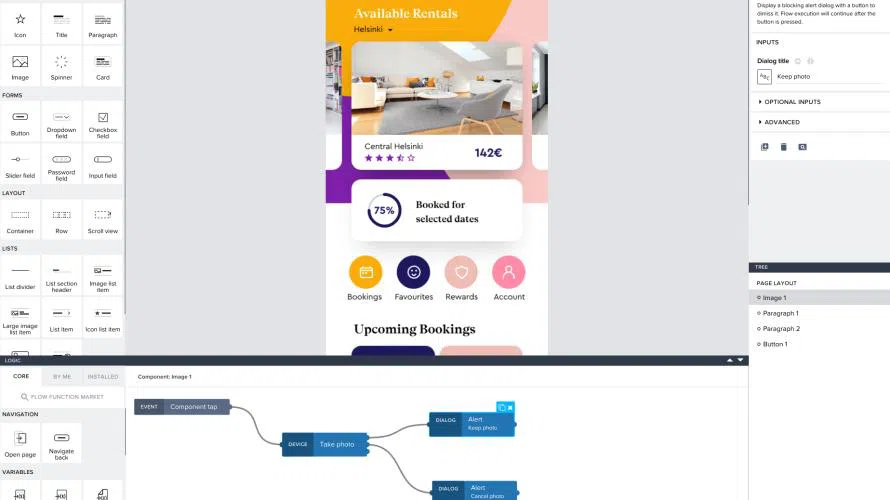 AppGyver displays the finished app in the no-code builder. On the left the components, on the right the properties and at the bottom the underlying business logic (c) SAP

In addition to the new tool for development professionals, SAP has presented tools for low-code / no-code development. This should also enable less experienced SAP users in the specialist departments to develop applications. The basis for this is the Business Technology Platform (BTP). Building on its integration platform, SAP has introduced new low-code functions for the SAP Business Application Studio. In addition, the software manufacturer wants to enable its customers no-code development and automation via the tools of the acquired tool provider AppGyver. Existing apps can be improved and complex tasks automated, the provider promises. AppGyver is now fully integrated into SAP. However, the tool should also be available for users of other applications in the future.

In order to make it easy for developers to get started with BTP, SAP wants to offer free test environments. In this way, the Group meets the wishes of its customers. The German-speaking SAP User Group (DSAG) has long been calling for SAP to provide test instances simply and free of charge, so that users can experiment with the new possibilities without having to buy licenses right away. “We listened,” Mueller said. Even if it took quite a while for the request of the customers in Walldorf to be heard.

SAP is also building bridges for its customers elsewhere. At TechEd, the provider presented a new version of the SAP Integration Suite. The SAP BTP integration layer offers preconfigured content and adapters for the integration of SAP applications and third-party applications via the SAP API Business Hub. From the end of 2021, the SAP Integration Suite will also be available for the Google Cloud Platform. In addition, SAP has presented new possibilities to simplify migrations from on-premises SAP BW systems to SAP’s cloud data warehouse. On-premises extensions of the business warehouse should be easier to take with you to the cloud. In addition, SAP wants to provide more AI functions directly integrated into applications to help companies make decisions.

Overall, more developers are needed to help user companies leverage the new opportunities in the cloud. The SAP managers are convinced of this. On the occasion of TechEd, CTO Müller referred to the further worsening shortage of skilled workers and referred to IDC figures. As a result, four million developers will be missing worldwide in 2025 – currently there are 1.4 million. SAP wants to counteract this and provide its customers with new learning tools to empower their employees to get more out of SAP systems. “We are turning our learning offer upside down,” promised Müller. As many people as possible should be able to acquire SAP know-how free of charge. The group wants to start with seven courses on the Business Technology Platform (BTP).

SAP is also launching a new SAP learning website. A simple, intuitive design should allow easier and faster learning in important areas of innovation. According to SAP, the platform offers a comprehensive range of learning content that is available in various formats: from guided lessons to practical training to microlearning videos.

Get a free quote
PrevPreviousConversion to cloud Security: potential savings for 79 percent of EU companies
NextQuickly explained: the difference between vector and bitmap graphicsNext