The following bug fixes and changes are coming to the users with the Windows 11 update with the number KB5010414. […] 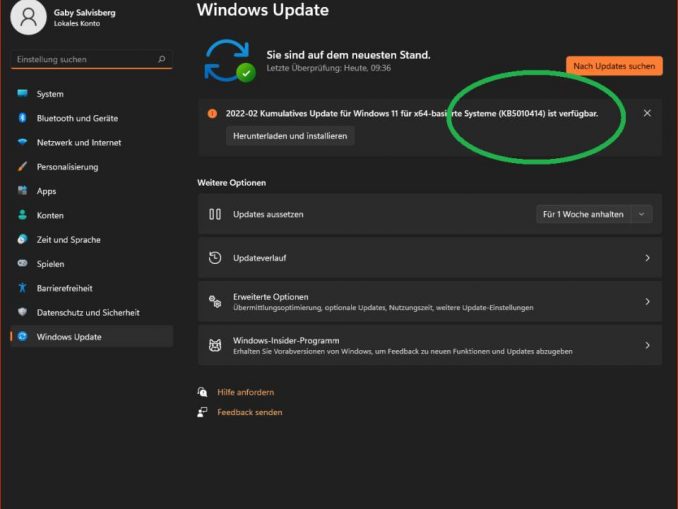 The update with the number KB5010414 is not a security update, but a function update. It is intended to fix some partly cosmetic errors and brings minor innovations.

Some users (incl. Author) should be pleased that this is intended to address, for example, the error in which tooltip pop-ups, which actually belong to the notification area, sometimes appeared on the screen in a completely different place. This also sometimes interfered with work or gaming.

After the mouse-over via the network icon in the right area of the taskbar (A), the associated pop-up sometimes appeared shortly afterwards in a completely unexpected place (B) (c) PCtipp.ch

Cookies can now be shared between the Microsoft Edge browser and its Internet Explorer mode. It is also new that in multi-screen mode the clock can also be seen in the task bars of the other monitors. Unfortunately, however, it was missed to bring back the seconds display requested by thousands of users in the said watch.

A very obvious innovation is that the widgets or the weather display now moves to the left edge of the taskbar, provided that the taskbar is centered. If you don’t want the weather or access to the widgets there, you can align the taskbar icons left-aligned again (as in previous versions of Windows) or simply hide the wigdets. To do both, right-click on a free spot on the taskbar and open the taskbar settings. In the upper part, the widgets can be set to “Off” via toggle switch.

If the taskbar is aligned to the left, the widget icon is placed to the right of the Start Menu button by default. These settings can be found in the same place. Scroll down a little and unfold Behavior of the taskbar. In the drop-down menu, switch to the left behind taskbar alignment.

Last but not least, Microsoft Teams now displays a clearly visible microphone in the notification area as soon as you have entered a Teams meeting. The microphone can now be switched off and on more conveniently via the symbol.

For more information about the update, see Microsoft’s description of KB5010414. The update can be found via Start/Settings/Windows Update.